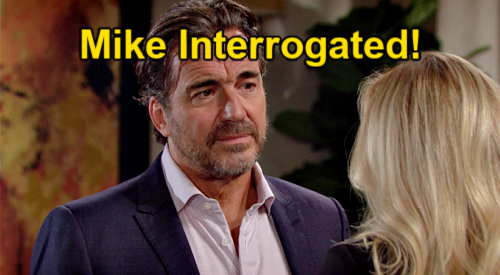 B&B spoilers reveal that Sheila will ask for Mike’s help once again. Sheila introduces Mike to a comatose Finn. Finding out that Finn is alive and Sheila has to keep him alive will blow Mike away.

That is when Mike starts asking questions, which Sheila answers. Of course, don’t expect Sheila to tell Mike how Finn really ended up in a coma.

While Sheila might admit to shooting her own son, she will make it sounds like some tragic accident.

It is teased that Sheila will also remind Mike of all their best moments.

Then, Sheila uses that connection to get Mike to help her. Then, Finn’s heart stops and Sheila gets out the shock paddles.

While Sheila and Mike are taking care of Finn, Ridge and Taylor Hayes (Krista Allen) remember all of the horrible things Sheila has done to their family.

Ridge and Taylor make a vow not to allow Sheila to escape justice.

This leads Taylor to ask Deacon Sharpe (Sean Kanan) questions about Sheila. Deacon is trying to prove that he’s a changed man and had nothing to do with Sheila’s scheme.

So Deacon will probably tell Taylor everything he knows. However, Deacon probably has no clue where Sheila is or if she’s getting help from anyone.

The Bold and the Beautiful spoilers reveal that Ridge won’t just be working with Taylor to get answers.

The Bold and the Beautiful Spoilers: Sheila Carter Runs

While Ridge and Brooke get a lead on Mike, Finn’s memories will start to rush back. Finn will be horrified that his biological mother tried to kill Steffy Forrester Finnegan (Jacqueline MacInnes Wood) and put him in a coma.

During the week of July 11, Finn will also be shocked to find out that Sheila has an accomplice. This probably happens during an escape attempt.

If Ridge and Brooke can track down Mike, they could pressure him for answers.

Mike might be a longtime friend of Sheila’s but he certainly doesn’t want to go to prison. So, Mike could betray Sheila by telling Ridge and Brooke what he knows.

Meanwhile, Finn tries to get out of his situation. This could lead to Finn trying to escape while Sheila is surrounded. Don’t expect Sheila to get caught just yet.

This is only the beginning of the end and when Sheila is finally apprehended, it will be explosive… literally.