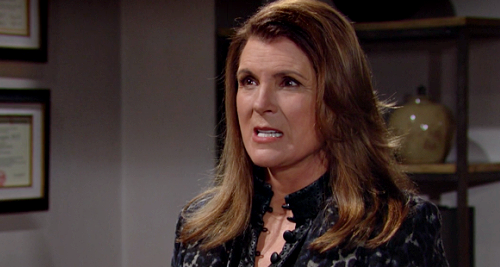 Taylor has already been wary of Sheila’s obsessive tendencies coming out toward Brooke.

Since Sheila has shown signs of being fixated on Brooke lately, Taylor is keeping an eye on the situation. She can tell Sheila has way too much anger toward Brooke and is worried about the potential for scheming.

Finn also got a visit from Sheila in the February 7 episode, which led to his own Brooke fears.

Sheila ranted about Brooke being so against her relationship with Finn and Hayes Forrester Finnegan (Piper Harriot).

Sheila also made it clear that she wouldn’t allow Brooke to stand in her way and talked about Brooke’s imminent day of reckoning.

Of course, Sheila tried to cover when Finn got suspicious, but he may remain concerned.

That’s especially true if Sheila meets back up with Finn again and drops another hint about possible Brooke revenge.

Sheila will definitely raise Taylor’s suspicions again during the week of February 14-18. Taylor will be taken aback when Sheila gloats over Brooke’s downfall and seems to know too much.

If Finn and Taylor ultimately compare notes, perhaps they could join forces on solving the Sheila mystery.

Taylor and Finn might decide to spend more time with Sheila or ask specific questions – just with the goal of figuring out what her Brooke angle is.

Depending on what else Sheila lets slip, there’s the potential for Finn and Taylor to get enough clues to click everything together.

If that happens, Taylor and Finn may fill Steffy Forrester (Jacqueline MacInnes Wood) in on what they’ve learned.

It could lead to some conflict if Steffy doesn’t want to reveal the Champagne label swap and risk Ridge Forrester (Thorsten Kaye) giving Brooke a pass for her latest mistakes.

If Taylor and Ridge are already on the road to a reunion by then, Steffy may be hesitant to rock the boat.

Of course, Finn and Taylor might disagree on that. They could argue that the truth has to come out and set the revelation in motion.

Whatever the case, Taylor and Finn have both been given clues about Sheila’s Brooke plot.

More hints may be in the works soon, so don’t miss what’s in store. We’ll deliver updates as other B&B news emerges.

The Bold and the Beautiful spoilers say Finn and Taylor will deal with more suspicions, so stay tuned to see if they’ll team up and uncover Sheila’s Champagne label swap plan.

CDL’s where you want to be for great Bold and the Beautiful spoilers, news and updates, so make us your top B&B source.