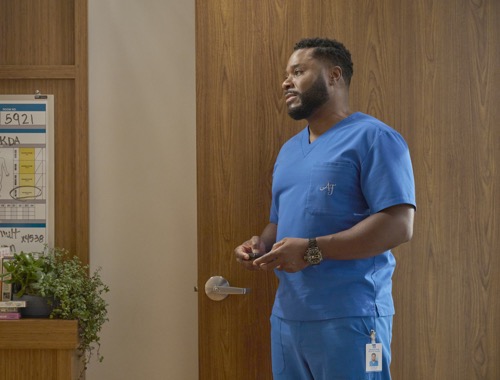 Tonight on FOX their new medical drama The Resident airs with an all-new Tuesday, September 27, 2022, episode and we have your The Resident recap below. In tonight’s The Resident season 6 episode 2, “Peek and Shriek”  as per the FOX synopsis, “The high stakes governor election results in violence at the polls, causing multiple victims to arrive at Chastain.

Conrad finds common ground with an aggressive patient, helping lead to a diagnosis for his outbursts. Meanwhile, when another patient’s lung collapses, the doctors find a serious root of the issue.”

Tonight’s The Resident episode begins with Randolph’s treatment is doing well, but Kit is tied up in knots. Elsewhere, people are waiting to vote and a guy knocks another guy down because he was not moving fast enough and looking at his phone. Other people get involved, and there are multiple injuries, nurse Ellen is there and calls it in.

Devon asks Kit for help with a consult for the patient who has MS and is in horrible pain. Kit says he will be happy to take a look. She tells him that she hopes the election goes their way so they can get more funding.

AJ is with Padma, she is very pregnant.

Conrad is at the nursing station when Cade walks in and they are all formal with each other, Irving walks by and says professional, we all know you are dating. He tells her she would stay later in the morning so she could share breakfast with his daughter, and she replies that she went to vote.

The injuries come in from the voting line, Cade distributes them all to various trauma rooms.

Irving is with one guy who was tackled, Mr. Mendez, and he just wants out of there. Conrad comes in to take a second look, he tells him that they need to take pictures to make sure nothing is broken inside.

Leela is with Maya when she gets a text for multiple injuries in the ER. She walks in with her intern, Irving tells her to help a guy with a sprained wrist.

Another patient, Stewart, is losing it and has a scalpel in his hands and tries to attack Billie. Conrad tackles him, and when he does he sees a Tatoo on his arm, he is a vet. After Stewart is restrained, Conrad goes to see him and he tells him that he was in the Marines too. Stewart says he has been out for twelve years. Conrad asks him what is going on, he was pretty on edge. Stewart says he just loses it sometimes. He says he is staying with his sister.

Devon brings Kit in to see his patient with MS. He says this is nothing like MAS, it is fire shooting down his legs. He says he didn’t do anything crazy and doesn’t know what caused it. Kit wants to take some images and if all goes well he can continue with the clinical trial.

Billie asks Conrad how Gigi is doing, he says no more nightmares. He tells her that Gigi misses her and they should do something soon. Cade brings Conrad a coffee and calls him her hero for tackling Stewart.

Emma comes into the ER, she is Stewart’s brother and Conrad tells her what he did with the scalpel. She is worried about his returning to her place.

Conrad tells Emma that he is waiting on some test results, they go to see Stewart and he is gone. Conrad finds him outside.

Kat and Billie are going over the X-rays of the patient with MS, Ben, he is responding to Devon’s clinical trial very well. He has a fracture in T11 and could have happened just getting from his bed to his wheelchair. They could do surgery, but he could lose even more mobility. Billie tells Kit that if there is any support she needs, with what Randolph is going through.

Conrad tells Emma that her brother was prescribed medication to quit smoking and one of the side effects is aggression and mood swings.

Officer Carter comes into ER, he wants to charge someone for the incident in the lineup, namely Mr. Mendez but it wasn’t his fault, it was Stewart’s fault. All of a sudden, Mr. Mendez’s chest collapses and Conrad runs to him. Later, AJ and Conrad go over his X-rays and find a mass, they need to remove a blockage, it is an obstruction threatening the bowel and it can perforate at any time. AJ invites Leela who brings her intern with her.

Kit goes to see Ben and tells him what is causing him so much pain, she explains the fracture. Devon adds there is no guarantee that he might not lose some mobility or continue with the trial. Ben says he wants to do it.

Mr. Mendez is about to go into surgery and he is sacred. Maya gets him to sign some papers and calms him down. In surgery, AJ and Leela see that it has metastasized, the damage is beyond treatment, and it is terminal. Maya says there might be something they can do to help him, she told him he was going to go to sleep and wake up better, they have to do something, and she runs out of the operating room crying. Leela apologizes to AJ, and he tells her that she should have been careful when speaking to a new intern in surgery, it sounded like Leela didn’t care at all about Mr.Mendez.

Mr. Mendez is awake, Leela tells him that with cancer he has, it was likely already advanced when he started to have pain. And, his time may be short.

Leela finds her sister in the washroom crying, she says she can’t feel the babies moving. Leela has her lie in bed and tells her she is going to take a listen. Leela hears the heartbeat, the two of them. She tells her she is fine. Padma says she keeps thinking about all the things that can go wrong. Leela says it is called being a parent and it is normal. Padma asks her what if she is terrible at it what if she is not ready? Leela reminds her that she is not alone.

Leela speaks to AJ and tells her that he thinks Padma is terrified. He wants to help.

Devon goes to see Ben, he is sleeping after surgery and Kit is with him. She tells Devon that he is stabilizing. She says Randolph is doing better, but it is always there, she is scared. He tells her that she does a really good job at keeping that a secret. And, he tells her there is hope.

Leela and AJ surprise Padma with dinner in her room with them.

Cade drops by with food for Conrad and Gigi, who are in bed, so the two start making out.

Billie goes to see Kit, she tells her that she knows it was a rough surgery. Kit turns on the TV, Mark Betz is the new governor of Georgia, Kit says so much for hope.

Cade wakes up, she starts getting dressed and Conrad hears her. He tells her that he is not going to let her run away this time. She says something is going on with her dad, and she can’t get it out of her mind. She tells him about a patient named Carmen, who operated on her, she had Edward’s syndrome. When she died, he took it hard and started drinking and writing prescriptions. He always claimed he had it under control. She says he quit five years ago but she is always looking for any kind of sign. She says maybe it’s nothing, but the other day she saw him take a pill. And today, he had this bruise on his forehead and he seemed jittery. He tells her that if he is using while he is working that is a problem. He hugs her.