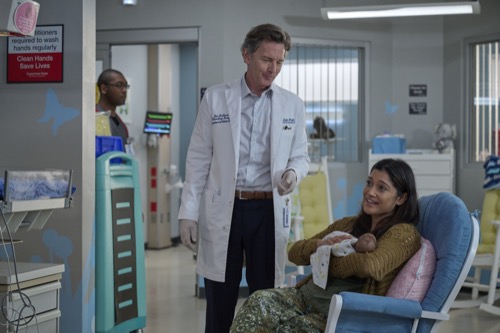 Tonight on FOX their new medical drama The Resident airs with an all-new Tuesday, October 11, 2022, episode and we have your The Resident recap below. In tonight’s The Resident season 6 episode 4, “It Won’t Be Like This For Long”  as per the FOX synopsis, “Ian is faced with performing surgery on a Jane Doe NICU patient while he continues to struggle with his personal issues. Meanwhile, Conrad asks Devon to cover his shift so he can spend a day at home with an anxious Gigi.”

Tonight’s episode begins with Conrad who hears Gigi coughing and goes upstairs to check on her. She says she feels sick, she thinks she has a cold. Conrad tells her she has Ferris Bueller syndrome, where little kids don’t want to go to school. She says she doesn’t want to do Taekwondo anymore.

Ian’s in the hospital elevator and he has some kind of reaction, his hands are shaking and he is grabbing his chest. When he sees Tabitha, she says his eyes are black. He says it is nothing, an annual eye checkup, is what drops will do. She says her cousin had eyes like that when he was going through their withdrawal. He asks her if they can move his drug test, and she says unfortunately no.

Cade goes to see a patient, 21 years old, the name is Diana and she asks Cade about her baby, she gave birth late last night. Diana says they won’t let her see her and it’s her fault her baby is suffering. She says she wants to get clean. Cade says first they have to get the infection under control.

Conrad calls Devon and tells him that Gigi needs some tough love.

Irving tells Devon about a patient, Marty, who is a nerd like him. She took a little tumble. He tells her that he wants to get to the bottom of her myasthenia flare.

Padma and the babies get the green light to go home.

Ian hears a baby crying, he picks her up to try to calm her and all of a sudden has to run because he is sick.

The baby needs surgery asap and Ian wants to postpone until after 4 pm because he knows he is detoxing for that drug test. Billie tells him that the baby needs the surgery as quickly as possible, they can’t wait. Ian goes back to his office and looks up online how to buy a sample of urine, and he does it, which costs him $62.39.

Ian goes to see the mother of the baby, Diane, he tells her that the baby needs surgery to remove a sack of fluid on the back. He is a little harsh and Cade cuts in. Then, outside the room, Ian acts all upset because Diana is a heroin addict.

Leela is with Devon, he talks to her about his case that has myasthenia. He says maybe her treatment didn’t work because they are treating the wrong thing. He goes to see Marty and tells her that he wants to take a step back. Maybe her original diagnosis was flawed. She agrees to do more tests.

Diana is going through withdrawal and she is getting really angry, Cade is there, and Diana is in shock.

Devon consults with Billie about his patient, she gives him some advice.

Ian looks at the clock, it is 2:45 pm, he is waiting for his urine sample to arrive and gets a message, it is going to arrive at 5:45 pm, and is angry.

Bille is doing a test on Marty, Irving walks by and is surprised that he is testing her since she was diagnosed with myasthenia. Irving is against it and Devon says he is just trying to help his patient. Devon calls Conrad and tells him what he did. Conrad tells him to go with his gut feeling. Devon does an MRI and there is a tumor, he believes Marty has lung cancer.

Ian is breaking down, he can barely stand and has blurred vision. Bille comes in and says baby Jane is going to the ER, they don’t have any more time. Ian tells her to start without him. It is 4 pm, Ian goes to have his test and finds out the technician is late and he is just about to lose it. Billie messages him to go to surgery and he runs to his office to get his pills so he can go into surgery. Cade comes into his office and tells him she is concerned about his actions lately, he completely loses it on her and calls her a disappointment. Ian takes his pills.

Ian shows up in surgery, and Billie asks him where he has been. Billie looks at him fading and tells him to pull it together.

Leela is in surgery and saves Diana.

Ian is in surgery, he talks Billie through it. He doesn’t want to do it and Billie tells him if Jane dies it is on him.

Devon tells Marty that she has cancer, and she was getting the wrong treatment. Cancer is not good news, but now that they know, they can fight it. If she fights, she could get some of her independence back.

Ian is out of surgery and Billie is not happy, she tells him that she should not have had to do what she did.

Ian is called to the lab for his test, on his way, he hears a man looking for assistance who is in his room. Ian goes in and offers to empty his urine bottle. Ian got away with using someone else’s sample for his test.

Cade goes to see Diana who asks where she is. Cade tells her she had her spleen removed, but she should be ok. Diana says she wants out of there. Cade tells her that she is in withdrawal and she has a long road ahead of her. Until she is clean, she is not getting her baby.

Ian receives the urine he purchases, locks it up in his office desk drawer, and smiles.

Leela and Devon update each other on their day, she calls them a power couple.

Gigi is at her Taekwondo class and does very well, Conrad is there watching as she receives a new belt.