The Young and the Restless Spoilers: Diane Packs Suitcases to Leave Kyle & Harrison Behind – Flees From Jeremy Stark 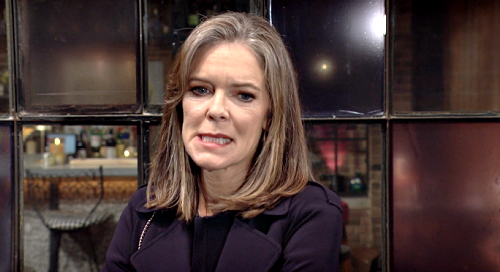 The Young and the Restless (Y&R) spoilers tease that Diane Jenkins (Susan Walters) will be ready to break her abandonment promise, so she’ll pack her suitcases to leave Kyle Abbott (Michael Mealor) and Harrison Abbott (Kellen Enriquez) behind.

During the week of November 28-December 2, Diane will assure Jack Abbott (Peter Bergman) that she won’t run away again.

The thought of doing that to Kyle and Harrison will tear Diane up inside, so she’ll vow not to abandon her family again.

Of course, that’ll be before Jeremy Stark (James Hyde) shows up in Genoa City!

It looks like Phyllis Summers (Michelle Stafford) will be responsible for summoning Jeremy and sending him to the Abbott house.

Phyllis’ goal will be to scare Diane right out of town – and her plan will seem like it’s going to work after Diane faces Jeremy’s wrath.

Jeremy will have unfinished business with Diane due to her immunity deal and role in locking him up.

The week of December 5-9 will bring a bold and no doubt painful decision for Diane.

Y&R spoilers say Diane will pack her suitcases and most likely decide to head for parts unknown.

Diane may tell herself the most important thing is to keep Kyle, Harrison, Jack and Summer Newman-Abbott (Allison Lanier) safe.

If Diane’s involvement with Jeremy brought harm to any of them, she could never live with that.

Although Diane will know she’s going back on her word, she may think it’s what has to be done.

Nevertheless, Diane may feel backed into a corner just like Phyllis intended. This could suddenly turn into a dire situation where Diane feels she has no choice but to bolt.

Even so, there’s no guarantee Diane will actually go through with leaving GC. Diane may pack up her suitcases – only to get caught by Jack, Kyle or even little Harrison.

Perhaps Harrison could ask where his “DiDi” is going and beg her not to leave.

That might be enough to convince Diane to pick fight over flight for once!

In other words, Diane will decide to break her abandonment promise, but she might have a last-minute change of heart and find another solution. As other Y&R news rolls in, we’ll bring you updates.

The Young and the Restless spoilers say Diane will get rattled thanks to Phyllis’ dirty move and Jeremy’s threats, so stay tuned.

CDL’s where you want to be for terrific Young and the Restless spoilers, updates and news, so check back regularly.