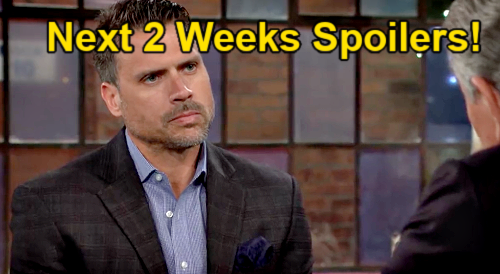 The Young and the Restless (Y&R) spoilers for the next two weeks, June 27 to July 8, tease that Victoria Newman (Amelia Heinle) will land in a compromising situation while Nick Newman (Joshua Morrow) faces a loyalty test. Chelsea Lawson (Melissa Claire Egan) and Billy Abbott (Jason Thompson) will also reconnect, so here’s what Y&R fans can look forward to.

During the week of June 27-July 1, Jack Abbott (Peter Bergman) will refuse to accept Phyllis Summers’ (Michelle Stafford) excuses and will stand his ground on the end of their fleeting romantic moment.

Meanwhile, Nick will consider making a Newman Enterprises comeback, so he’ll pitch the idea to Sharon Rosales (Sharon Case) and get some advice.

Once Tessa Porter (Cait Fairbanks) heads to the doctor for answers about her persistent sore throat, she’ll find out she has some vocal nodules. That’ll bring concerns about Tessa’s career and whether she’ll need surgery.

As for Chelsea, she’ll have some new opportunities on the horizon. One should involve getting an official offer to become Marchetti’s newest designer.

Chloe Mitchell (Elizabeth Hendrickson) will end up sparring with Chelsea again, so she may object to Chelsea’s solo success.

Chelsea will chat with Billy eventually, so he might want to discuss a fashion podcast. Regardless, Billy will soon get a reminder of just how well Chelsea used to know him as they reconnect.

Over with Imani Benedict (Leigh-Ann Rose), she’ll be tasked with getting Elena Dawson (Brytni Sarpy) out of her Newman Media contract so she can do a medical podcast for Chancellor-Winters.

Nate Hastings (Sean Dominic) will count on Imani to pull it off before Elena gets back from her Hawaii trip, but Imani will be far more interested in sabotaging Elena.

The last thing Imani wants is for Elena to have a reason to grow closer to him through work.

Imani would rather build on any growing problems and potentially make a move on Nate while Elena’s out of town – at least if the opportunity arises!

Diane Jenkins (Susan Walters) will try to get some sympathy from Jack, so that may tie in with her search for work in Genoa City.

Kyle Abbott (Michael Mealor) will offer Diane a job in Marchetti’s PR department, so Jack will seem rather unsettled about that.

Jack will make an offer of his own to someone, so we’ll see if he suggests a different Jabot to Diane or something along those lines. Regardless, Diane should be feeling good about her career trajectory.

Back with Nick, his loyalty will be put to the test. Nick might find out what Victoria is really up to and be sworn to secrecy with Victor Newman (Eric Braeden).

Victoria will work hard to deceive Ashland Locke (Robert Newman) out of $250 million, which would essentially undo the deal he made with Victor.

It seems Victoria will have big plans to break Ashland’s heart and steal the money back through this new venture.

Victor will form his own plan of attack without knowing Victoria’s game plan, so that could put Nick in a tight spot if he learns the truth.

Soon after, Victoria will get caught in a compromising situation.

Ashland might overhear Victoria on the phone with Nick and realize she’s conning him with this whole “us against the world” vision she’s created.

After Victor delivers an ultimatum to Adam Newman (Mark Grossman) and tries to keep his son in line, he’ll work on a power play during the week of July 4-8.

Ashland will work on a strategy of his own following a stunning discovery, but it won’t pan out like he hoped.

It sounds like Ashland may try to play Victoria for a bit and perhaps wiggle out of the trap she’s set for him.

Whatever the case, Ashland’s plan will fail, so that could mean Victoria is headed for a big win.

Victoria may pull off a successful con and finally feel the revenge she’s been craving.

Chelsea will also mull over a new gig, so that could involve that fashion podcast idea we mentioned.

Lauren Baldwin (Tracey E. Bregman) had concerns about Chelsea burning out, so Y&R may try to put her in a position to do that.

Elsewhere, Phyllis will lose her temper, so Diane may be on the receiving end of her wrath. It’d be a great way for Diane to play the victim with Jack!

The Young and the Restless spoilers say Diane will remain the ultimate pot-stirrer in GC, so stay tuned.

CDL’s the place to be for great Young and the Restless spoilers, updates and news, so drop by regularly.