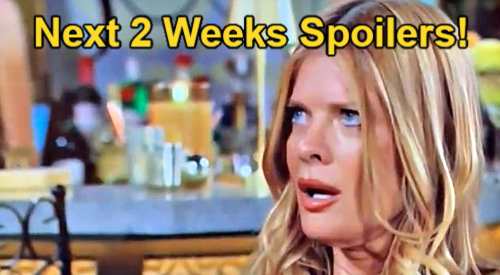 The Young and the Restless (Y&R) spoilers for the next two weeks, December 5 to December 16, tease that Tucker McCall (Trevor St. John) will have a mystery ally while Jeremy Stark’s (James Hyde) real goal is revealed. We’ll also see Nate Hastings’ (Sean Dominic) reversal on a decision while Summer Newman-Abbott (Allison Lanier) tackles a challenge, so here’s what Y&R fans can look forward to.

During the week of December 5-9, Diane Jenkins (Susan Walters) will get scared enough to pack her suitcases.

However, Jack Abbott (Peter Bergman) may catch Diane before she goes and push her to give him a chance to fix this Jeremy crisis.

That’ll be easier said than done since Jeremy will want more than just Jack’s money.

Jeremy will have another goal in mind and will keep hinting about some unfinished business. It’s possible Diane is in possession of something valuable or was once upon a time.

Jeremy might have a specific item he’s after or maybe he’s after a bigger payday from someone else.

Tucker’s mystery ally will come into play, so he might be paying Jeremy a hefty sum to stir the pot.

However, there’s no denying that Phyllis Summers (Michelle Stafford) summoned Jeremy and gave him the Abbotts’ address.

That’ll bring some serious backlash and will ultimately result in Jack giving Phyllis a stern ultimatum.

Kyle will also blast Phyllis before warning Jeremy to stay away from Diane, but he’ll save some outrage for Ashley Abbott (Eileen Davidson) when they have their own faceoff later.

Over with Daniel Romalotti Jr (Michael Graziadei), he’ll keep something under wraps.

There’ll be some big secret, so there’s a chance he’ll be Tucker’s mystery ally instead of Jeremy.

After all, Daniel’s story about leaving the art world for something more lucrative sounds familiar.

That’s the path Audra Charles (Zuleyka Silver) followed as well, so Daniel might be connected to the same art fund with Tucker ties.

If so, that could cause major problems – especially since Daniel already seems to be falling for Lily Winters (Christel Khalil) again.

Over with Billy Abbott (Jason Thompson), he’ll break down Chelsea Lawson’s (Melissa Claire Egan) walls again and do his best to support her.

Nate will also find himself in a position where he’s trying to undo some damage and reverse a decision.

Will Nate do an about-face on the podcast offer he made Elena Dawson (Brytni Sarpy?

The same goes for Nate’s offer to turn his LA business trip into a romantic getaway with Elena.

While Nate and Elena’s relationship hits another snag, Sally Spectra’s (Courtney Hope) love life will do the same.

There’ll be a sense of closure as Sally sleeps with Adam Newman (Mark Grossman) one last time and ultimately says a more final goodbye.

The problem is Nick Newman (Joshua Morrow) will find Adam leaving Sally’s suite and know exactly what just went down.

Sally will have a tough time explaining herself and convincing Nick that he’s the man she truly wants.

Later, Nick will force Summer to rise to the challenge.

Summer might realize Sally has already been flip-flopping and messing with Nick’s heart, but he may push her to dial down the rage.

Over with Audra, she’ll do whatever she can to seduce Noah Newman (Rory Gibson) and get him back into bed.

Chance Chancellor (Conner Floyd) will also do something bold, so that may involve having Abby Newman-Abbott-Chancellor (Melissa Ordway) served with divorce papers.

Then again, it’s possible Chance will do something impulsive like kiss Sharon Rosales (Sharon Case) if he’s feeling gutsy enough.

During the week of December 12-16, Chelsea will make peace with someone.

That could be Sally if Chloe Mitchell (Elizabeth Hendrickson) suggests they should all work together on the new interior design business model.

Lily Winters (Christel Khalil) will also have peace on her mind, so she may soften toward Nate and hope Devon will do the same eventually.

As for Phyllis, it looks like she’ll double down on her Diane attacks and face the consequences.

Phyllis’ plot will backfire in a big way, so she’ll no doubt rile up Jack and Summer even more.

Jack will eventually strike a risky deal with someone, so that could be Jeremy or even someone like Victor Newman (Eric Braeden) if they decide to team up against Jeremy’s threat.

Jeremy could become an issue for the whole “coven” as Diane likes to call Ashley, Phyllis and Nikki Newman (Melody Thomas Scott), so Jack’s problem could become Victor’s problem, too!

The Young and the Restless spoilers say the next two weeks will bring some clashing and curveballs, so stay tuned.

CDL will have all the hottest Young and the Restless spoilers, news and updates, so make us your one-stop source.