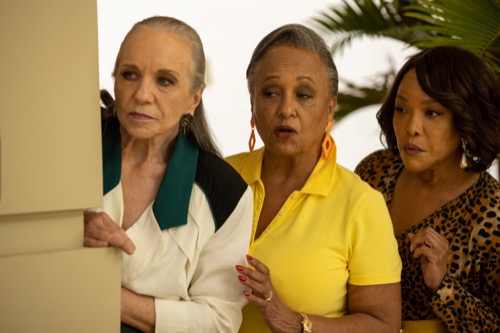 Tonight on FOX their new reboot Fantasy Island airs with an all-new Monday, January 23, 2023, episode and we have your Fantasy Island recap below. On tonight’s Fantasy Island season, 2 episode 4 called “Mystery in Miami,” as per the FOX synopsis, “Three best friends of fifty-plus years set out to track down the missing fourth member of their squad… in 1980s Miami! Meanwhile, Roarke confides in Segundo about letting people in, and Ruby’s cabin fever is an itch that needs to be scratched.”

So make sure to bookmark this spot and come back between 8 PM – 9 PM ET for our Fantasy Island recap. While you wait for our recap make sure to check out all our television recaps, videos, spoilers, news & more, right here!

In tonight’s Fantasy Island episode, a group of ladies visited the island. They were friends from Minnesota. Judy, Marcia, and Norah met in the 80s at a jazzercise class. They came to the island because there was another friend who disappeared. Her name was Rosemarie. Rosemarie was the instructor at the class.

She and the others quickly developed a bond. They became known as the fierce foursome. But then Rosemarie disappeared one day. She never showed up at the class. They stopped by her apartment and they found it deserted. Half the closet was emptied and everyone else assumed she ran away. It was just her friends that said Rosemarie wouldn’t have left town without telling them first.

The friends always wondered what happened to her. They got married and had kids and lived their lives. Time eventually slipped right past them, but they never forgot Rosemarie. She was gone and no one went looking for her. It was therefore the ladies’ fantasy to finally get answers. They want to know what happened to Rosemarie. It also doesn’t help that they’ve been listening to true crime podcasts. They figured they could solve the mystery if the island helped them and so that’s exactly what the island did.

The island sent them back to the 80s. They were able to go to Rosemarie’s apartment sooner than they did in real life and this time they found blood. They didn’t falter when they found the blood. They instead remembered old “Dateline” and “Law & Order” episodes. They searched the apartment for clues.

Only there might be a reason for that. Rosemarie wasn’t innocent as they thought. The ladies didn’t just find blood at Rosemarie’s apartment. They also found documents and business cards with fake names on them. Rosemarie was running a real estate scam. She would pretend to be a selling agent. She had people pay for nonexistent condos and she would disappear the moment the ink was dry on the checks. It’s how she was able to afford such a nice apartment. She was able to pull off this scam before electronic banking was what is today.

Rosemarie wouldn’t have been able to pull off this scam by herself. It was Marcia who suggested that Rosemarie must have had a partner and then her friends found out Rosemarie called Marcia. They were asking her about it when they had to go on the run because there was a man with a gun that was curious about them.

It was as they were driving away that Marcia came clean. She said Rosemarie called her asking for money. She thought she was in over her head with something. She told Rosemarie she wouldn’t give her money until she came clean with her and that was it.

Rosemarie hung up the phone. Marica thought Rosemarie would call back except she never did. Rosemarie disappeared for a second time. The secrets on top of some unpleasant truths about each other had driven a wedge between them all. They stopped talking to each other and they even planned on going their separate ways when they ran into Ruby. Ruby followed them in the 80s. She was feeling a little down that she could never leave the island or she risks dying as an old woman and so Elena suggested she go to the 80s with the ladies.

Ruby got to enjoy seeing Prince live in concert. The ladies meanwhile did one thing they promised Ruby they wouldn’t. They split up. They didn’t mean to. They went to the club and the large crowds pushed them in all different directions. They got split up by accident. They ended up living their fantasy of finding Rosemarie. They each got to find her. They talked to her. They were able to reconnect after all these years and they realized stuff about themselves. Marcia doesn’t say no to her children because she was afraid they would stop loving her like their father did.

Judy misses her late husband. She threw herself into activities after he died and she never allowed herself to be angry until Rosemarie reminded her that its okay if she’s angry sometimes. Norah got to finally revealed how bored she was now in life. Her husband was happy being retired and golfing, but Norah wanted to look into Rosemarie’s disappearance because that was probably the most exciting thing to ever happened to her in her life of safety. The ladies all got to say what they wanted to say to Rosemarie and then they were miraculously reunited with each other.

She and her ex-boyfriend Bill Reina were wanted in four states. The ladies were able to convince the FBI Agent to make a deal with Rosemarie in exchange for her testifying against her ex-boyfriend. He said the deal would only work if he found her, but they ended up finding her for him.

The ladies remembered how Rosemarie was obsessed with this Filipino desert. They went to the food truck where the best place to find that desert was and they convinced the lady running the place to hand an envelope to Rosemarie for them. The ladies ended up leaving the 80s after that, but they returned to twenty-first century to find Rosemarie waiting for them on the island.

She got their message in the 80s. She became a witness against her ex. She changed her name. She went on to get married and have kids and now grandkids. And Rosemarie left like she did because she hadn’t wanted Bill to find out about her friends.

She was worried about what he might do to them. Its why she ran like she did. She never reached out because she was ashamed of herself and what she used to do, but her friends loved her no matter what and their reunion was long overdue. It gave Norah the courage to start a business. It gave Judy the courage to finally grieve her husband. And Marcia was going to lay down the law with her kids.

And Ruby came back from the Prince concert to go looking for Isla. She wanted another chance at romance with her and she ultimately convinced Isla to give her a chance.