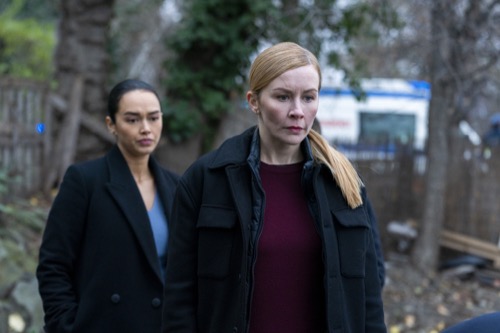 In tonight’s FBI International episode, Forrester decided he wasn’t going without a fight. He wasn’t going to just accept the transfer. He was going to try and fight it through several means and he has his whole team’s support for it. Dandridge tried getting to the team. He told them that Forrester was going to be moved to Alabama whether he liked it or not. Dandridge seemed so sure of himself, but he forgot one thing.

Forrester is great at the job. He wouldn’t have lasted so long if he wasn’t. The only thing he was guilty of was that he was showing up his boss. He was too good at the job. And so Dandridge wanted to remove him so that he himself could take credit for “correcting” the team.

Dandridge was a clown. The team didn’t take him seriously. They thought he made several calls that got in the way of the job and they all wanted Forrester to succeed at keeping his career. They even went straight to Forrester after they talked with Dandridge. They wanted to hear Forrester’s game plan. He told them he was calling in favors everywhere he could. He said that he was doing his best and they wanted to advise him on how he could do it better when they got a call about a new case. There was a missing an American girl that showed up in Austria.

The girl was named Katie Marsh. She went missing when she was a little girl back in the States. Its now been years since she was kidnapped and so it came as a surprise when a woman claims to have talked to her in Austria. Katie was a teenager now. She was unsteady on her feet because she had been drugged. She tried asking for help and she even left behind a ring proving who she was. Katie disappeared again after she tried asking for help. The woman she talked to hadn’t known enough English to understand Katie was in danger.

But she got Katie’s name. She also had surveillance footage of Katie herself. Katie matched the image of what an aged up Katie would look like and they tested the ring. The DNA from it proved that it really was Katie. It wasn’t another Nicholas Barclay situation. There was this man who pretended to be a kidnapped victim to con a family and it took months of renewed hope as well as a DNA test for the truth to come out. Forrester and his team went into the situation hoping it wasn’t another situation. And they instead confirmed that Katie was still alive.

The FBI flew to Austria. They met up with a cop that worked Katie’s original case back in the states. Only the guy has since been fired from the police department. He also married Katie’s mom. Katie’s parents split up after she went missing because her dad wanted to move on and have another baby and her mom didn’t think her child could be replaced. The mom remarried the only other person still looking for Katie. They flew to Austria the moment they heard Katie might have been found and they wanted to help in the investigation to find her.

Forrester was willing to accept their help. He just didn’t want to accept McKenna’s. McKenna was the new agent that Dandridge appointed to Forrester’s team and Forrester didn’t quite trust her. He still brought her along with the rest of the team to Austria. He chose to keep her out of the loop when they got more surveillance footage of the man who kidnapped Katie. The man was identified as Otto Lang. He was an American born in Austria. He has a dual citizenship. He also has a record. He was on file for picking up an underage prostitute.

Lang was in the area when Katie went missing. He made sure to grab Katie’s favorite toys when he took her. He brought her to Austria where he’s been keeping her hostage and she wasn’t alone. The video that had Lang in it also had Lang with a second victim. The second victim was identified as Clara Brunner. She disappeared when she was five. Her mom was a single parent and overdosed not long after Clara was taken. And if Lang wasn’t busy trying to control two victims at one – Katie would never have gotten away long enough to ask for help.

Forrester got a current address for Lang. He went there with his team and they were too late. Lang got away again with his victims. It seems Dandridge had gone on the news for a press conference to announce they found Katie alive. Dandridge was trying to take credit, but Katie was still out there and Dandridge ruined her rescue. Someone had told Dandridge about Lang. It couldn’t have been McKenna because she didn’t know about Lang. It couldn’t be Detective Saunders because he left the police force to get away from the politics.

Someone else on Forrester’s team had told Dandridge about Lang. Lang got warned in enough time that he enacted his place of escape. He traded his well-known car with someone else. He paid that person a thousand euros. He parked the car within a mile of a train track. Lang had everyone convinced that he was going to sneak on the train to Morocco. Dandridge ordered everyone to the train. The only person who didn’t go was Forrester. Forrester didn’t think Lang was going to leave Austria. He thought Lang was going to try to wait them out before he moved his two victims.

Forrester looked into Lang’s aunt who raised him. He found out the aunt had a property that was pretty deserted. He went there and he found Lang and the girls. Forrester was able to subdue Lang. He arrested him and he rescued the girls. And so when they went in, it was Forrester that was praised for being the hero.

And the only thing Katie wanted was to stay in Clara’s life. They grew close when they were kidnapped and so Katie’s mom and stepdad didn’t hesitate in putting up the paperwork to adopt Clara.

And McKenna came through for Forrester. She found out how Dandridge found out about Lang. Dandridge had hacked Forrester’s phone. McKenna reported him to their bosses and Dandridge got sent back to Washington while Forrester gets to stay with his team. But McKenna was moving on to a desk job. She was climbing the corporate ladder and she had drinks with the rest of the team before she left.