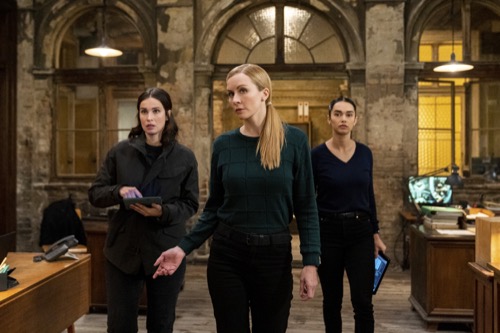 Tonight on CBS FBI: International airs with an all-new Tuesday, January 3, 2023 season 2 episode 9, “Wheelman” and we have your FBI: International recap below. In tonight’s FBI season 2 episode 9 as per the CBS synopsis, “The Fly Team races through the streets of Budapest to put a halt to a major art heist about to be perpetrated by an American. Also, Forrester grows angry as Dandridge watches every move the team makes.”

In tonight’s FBI International episode, Ken Dandridge was still hanging around. He was high up in the FBI. He was even higher authority than Supervisory Special Agent Forrester. But he was a nuisance. He demanded to be read in on every case and he kept Forrester from the field for one reason or another.

Something Forrester noticed. He first got tied up by the Hungarians. He was now stuck in Poland and he just knew Dandridge was behind it because he saw a file with Dandridge’s name on it. He just didn’t know why Dandridge had it out for him. Dandridge had Forrester doing analysts’ work. He was filing papers and he wasn’t with his team as they were getting fresh cases. And so Kellet finally confronted Dandridge.

Dandridge stopped by because he wanted information on their newest case. Kellet took that opportunity to ask why they didn’t have their squad leader and Dandridge wouldn’t say. He just told them to keep him updated in real-time. Which was a problem because the case was fast-moving.

It turns out that Europol recently took down art thief Daniel LaDee. LaDee was facing serious charges. He didn’t want to do that time and so he made a deal. He told them about a bigger fish. He said there was going to be another theft. Only this one will be bigger. It will also involve Michael Semien.

Semien was wanted by the FBI for numerous heists around the world. He was about to pull off a big job and LaDee said Semien was looking for a driver and that’s when Smitty remembered a little detail about Special Agent Raines. Raines scored the highest in driving at Quantico. His record hasn’t been beaten in the years since he left.

He was the perfect guy to act as a getaway driver. They had LaDee introduce Raines under a special cover. Raines then went on to win the job itself by shooting a Hungarian cop right in front of Semien. It was all a ploy, but Semien bought it and he invited Raines to join the heist in Belgium.

Semien likes to hire international crews for his heists in Europe. The more he works with them, the more he trusts them. Semien got on a private flight out of Budapest with both LaDee and Raines in tow. They went with him as he later met up with the rest of his crew. Dandridge didn’t want to allow Kellet and Vo to go at first.

He said that Belgium could handle it. But Kellet reminded him of the protocol. She said that undercover FBI Agents could determine who their handler was. Raines chose Kellet and they had the paperwork to prove it. Vo was going too because she was acting as Kellet’s second.

Once faced with protocol, Dandridge backed off. He allowed them to go on the job. Except it was no longer safe for Raines because Semien had contact with the Belgium police. His contact informed him that he had a mole. The natural suspect was the new guy. Semin suspected Raines and LaDee had to remind him that Raines already killed a cop.

Semien checked Hungarian newspapers just in case. There was a news story about a dead cop with no suspects. Semien backed down from questioning Raines, but the news story did affect his team. His tech guy pulled out because he thought there was too much heat on them.

Semien was without a tech guy. So, Raines stepped up. He negotiated a better cut and his supposed cut would be bigger than everyone else’s. It turns out Semien’s big plan was to rob a bank holding onto two hundred million dollars worth of uncut diamonds. It was his biggest heist to date.

LaDee tried to get Semien to back out. He claimed it was too dangerous only Raines spoke up for the heist. Raines also later took LaDee to task for trying to back out. If Semien wasn’t caught in the act, it was LaDee who would be going to prison. Not Semien. And so this heist had to go off one way or another and people were dying to make it happen.

The original tech guy that pulled out had gotten shot. Semien came to believe that guy was a mole and either way he wanted to be safe. But besides that guy, Dandridge has also been acting weird. He was calling the Belgium legate. He wouldn’t talk to his people on the ground.

It seemed highly suspicious and everything was happening so fast. Raines didn’t get a location before the heist. He was simply told that a car would be waiting for them. So, he went through with the heist. He got into the vault when one of the crew killed LaDee. They all knew LaDee was working with Europol because he was the one that brought in Raines.

It turns out Semien never lost his suspicions. He simply let Raines believe he was helping when in truth Raines got them in the vault and he was going to be killed afterward. But Raines fought off his attacker. He killed the guy and he and his team were able to arrest Semien and the one other crew member that survived. And they even determine who was Semien’s contact. It was some low-level officer who later got arrested and will serve time.

And Forrester returned to Hungary. He got in Dandridge’s face. Dandridge said he was observing the team because he found them sloppy. He thought Forrester wasn’t doing a good job and that’s why he was transferring Forrester to a desk job in Alabama.

Who knows what will happen to his team now?