Courtney Love’s Final Conversation With Kurt Cobain Was about $$$$$ 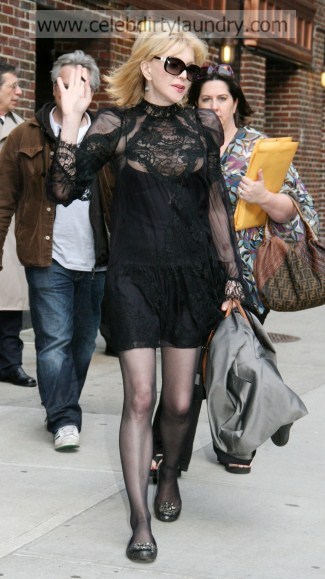 Courtney Love admitted her last exchange with the Kurt Cobain Nirvana rocker – who committed suicide in April 1994 – was about the possibility of his band Nirvana headlining the touring Lollapalooza festival after being told Smashing Pumpkins singer Billy Corgan was in line to earn $11.5 million from the shows.

Courtney recalled in an interview on TV station Fuse: “Our last conversation? It was about getting him into rehab. Oh no, it’s worse than that, my last conversation was if he didn’t do Lollapoalooza… it was gross, it was gross… like Billy would make $11.5 million from it. It was the last thing he wanted to hear. He didn’t care.”

The ‘Celebrity Skin’ singer – who has a 17-year-old daughter Frances Bean with Kurt – insists she was “put up” to having the conversation with her husband, after the couple were misled over their financial situation.   She added: “I got totally put up to it. The people around us were f***ing evil, like, ‘You guys are going to go broke.’   When he died he had $38 million and no one knows where that went”.  Photo: Fame Pictures