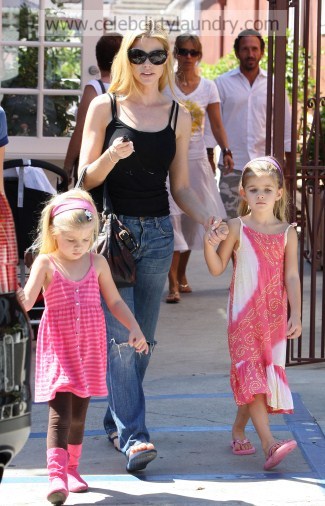 Actress Denise Richards – who has two daughters, Sam, five, and four-year-old Lola, with the ‘Two and a Half Men’ actor – could be called to the stand when Charlie Sheen appears in an Aspen court this month, on charges of assaulting his current wife Brooke Mueller.

In 2005, Richards accused Sheen of assaulting her and if asked to appear, she may have to recall her version of events.
In her account, Richards claimed Sheen: “Pushed me, shoving me with his two hands between my shoulders. I was forced backwards and tripped over one of the children’s toys and fell on the floor with Lola.”

Richards – who now claims to have an amicable relationship with her former spouse – signed a declaration of her statement after filing for a restraining order on Sheen just before their divorce.
Sheen – who is currently in rehab as a "preventative measure" – allegedly attacked Mueller on Christmas Day (25.12.09) while they were at their holiday home in Aspen, Colorado.   He was arrested but soon released on bail.   Since the alleged attack, Mueller – who has 11-month-old twin sons, Bob and Max, with the 44-year-old star – has also been in rehab to receive treatment for reported drink and drug problems. However, she has now been allowed to return to her Los Angeles home, accompanied by a team of experts.