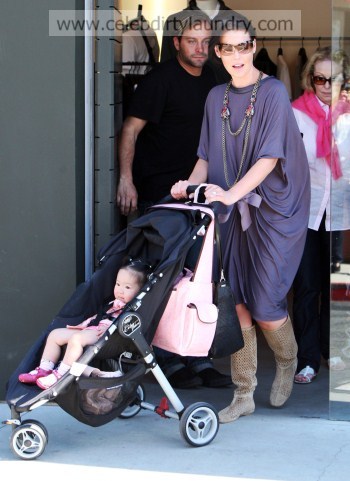 Katherine Heigl and husband Josh Kelley adopted 17-month-old Naleigh from Korea last September and the tot recently went into the operating theatre to repair a congenital heart problem but the little girl is now making good progress.   Katherine said: “Her heart is 100 per cent fine now. She has a scar, so she won’t be wearing bikinis, which is fine by us.”

The former ‘Grey’s Anatomy’ star also revealed how the adoption process was sped up for her and Josh because of they were willing to have a child with health problems.   She told America’s Harper’s Bazaar magazine: “A lot of children don’t find forever homes because they’re on that special-needs list, even if it’s because of something as simple as her mother smoked cigarettes for a month, not knowing she was pregnant. That’s not so huge that you couldn’t handle it.”

Katherine is enjoying every moment of motherhood and is even willing to forgo some romantic time with Josh do that Naleigh has everything she needs.   She said: “If parent time interferes with sexy time, that’s that.   “Now it’s time to re-evaluate and grow up … enough with the drama.”  Photo: Fame Pictures