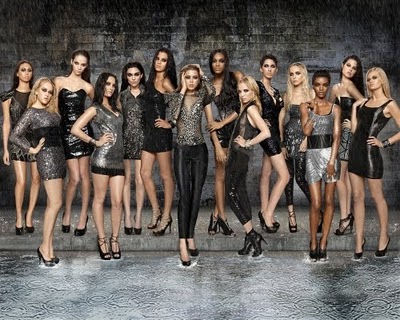 Last week was the premiere of American’s Next Top Model and the first contestant that went home was Angelia.  Following up on her premiere  Tyra announced via twitter that she would be launching a new website called typeF.com on March 15, 2011.   Tyra said about the site:  “Beauty is not one size, one shade, one style, one color YOU are beauty and typeF.com is the beginning of a movement that starts with and for YOU. It’s a destination that continues my mission to expand the definition of beauty. My goal is for typeF to be THE place where you will find your ultimate style confidence created for you, with you and by others like you.”

Now without further ado – here is tonight’s recap of episode 2.  Nicole opens up the night talking about how Tyra told her she looks 15 years older than she is – Nicole says that is something she will be working on.  Not sure how you can work on that.    Ondrei tells the girls that her brother died this year and the girls are confused as to how she can be on the show so soon.   At that point 2 people dressed in chef’s caps on and one of them is Tyra enter the room.  Tyra brought the person who helps her eat healthy.  Tyra’s chef Heather is going to teach them how they can indulge without feeling guilty.

Of course they are making it into a game and the girls are blindfolded and have to taste 2 foods and tell them them which one is healthier.   The moral of the whole exercise is – it is better to be healthy than skinny.

Dayla starts to give Alexandria a lecture on how to put chicken in the refrigerator.  Alexandria took exception to Dayla’s lecture.

The whole chicken thing started a huge of drama.

They receive Tyra mail which tells them tomorrow they will face their worse critics.  Today is all about acting – because models must emote.  Today they meet acting coach Eugene Bucia – he tells them acting is about having the courage to be confrontational.   Behind them is an easel and they are going to draw a picture of their inner critic.  They have to draw how they feel about this person.  Once they finish they have to confront their picture (inner) critic.

They all did such a good job they are gifted with a pair of earrings.  Ondrei mentions that today was a tough day for her and she is not sure she actually wants to be on the show.  She calls her boyfriend and tells him she is having a tough time.

The girls meet Mr. Jay at Smashbox studios – they will be working with some of the busiest bees in the business.  Then they hear bees buzzing – they will be wearing jewellery covered with pheromones to attract the bees

They all did such a good job they are gifted with a pair of earrings.  Ondrei mentions that today was a tough day for her and she is not sure she actually wants to be on the show.  She calls her boyfriend and tells him she is having a tough time.

The girls meet Mr. Jay at Smashbox studios – they will be working with some of the busiest bees in the business.  Then they hear bees buzzing – they will be wearing jewellery covered with pheromones to attract the bees.   ughhh they put cotton in their ears and nose so the bees won’t crawl up.

Mr. Jay felt Sarah was awkward during the shoot and Nicole was a little boring and lackluster.    Dominique is very nervous because she was in the bottom two last week.   Hannah was crying her eyes out during the shoot and Mr. Jay loved it.  He thinks Brittani is a professional.   He felt Ondrei just fell flat during the performance and it was very disappointing.

Ondrei says she wants to be here but she is not ready to be here.

The girls are at panel and of course Tyra goes over the prizes and introduces the judges – the guest job tonight is model Alex Wek who will help them decide who is eliminated.

Andrei is first and she tells them that she did not well in the photo-shoot.  She tells them she wants to go home she does not feel like she is ready to do this now.  They wish her good luck.  Tyra tells the other girls if her picture is the worst this week there will be no elimination.  If it is not there will be one.

Kasia they thinks was absolutely stunning, Dominique they think the pic was stunning – however only one picture was good.  Brittani’s pic they think is strong and interesting.  Jacyln they think the pic is beautiful but they wish she did something else with her hands.  Dayla her eyes are closed in the pic and all the pics with her eyes open were not good.  Alexandria’s picture is striking but she needs more intensity in her eyes.  Sarah they wish there was more strength in her photo.  Molly they say she looks like a warrior.  Nicole they say she looks older but the picture is beautiful.  This is the second time she is photographing older.  Hannah was crying so they said “oh you poor thing”  – they find it beautiful.  Monique has hijacked it – she looks like a beautiful women, the picture is fabulous.

First girl called –  Hannah and her picture will be displayed in their home.

Runner Up for best photo – Brittani

The bottom two are Nicole & Dayla

Ondrei’s picture was not the worst so someone is going home.