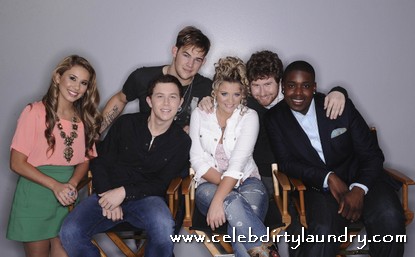 Our guest blogger, Rosie, from Fit Fab Celeb, provides us with a recap of tonight’s episode of American Idol.  American Idol is back tonight with the top 6 performing live with songs by Carole King. There are only a few weeks left in the competition until the season finale. Whose your favorite? Mine is Scotty McCreery, but I have a feeling James Durbin is going to take it.

In the bottom last week, Jacob Lusk is first on stage tonight to perform.  Here’s your idol performances, in order of appearance.

Jacob Lusk: Oh No, Not My Baby – Vocals were ok, but it’s always the same thing with this guy, time to go home. Tyler said they all new he could sing. they were just waiting for him to shake his tail feathers. Lopez said it was a tricky song and there some spaces that made it not perfect, but he killed it. Jackson said it was sharp here and there, but liked the energy.

Lauren Alaina: Where You Lead – OMG skank alert! Not Lauren, Miley Cyrus – they showed a tape of her mentoring Lauren, what a joke – she couldn’t mentor a mouse out of a paper box. Thankfully Lauren’s performance (and her whole look) was outstanding and made me forget about seeing the skank. Lopez said she was so proud of Alaina, she felt she pushed the barriers. Jackson said she came out with extra swagger. Tyler said she shined tonight when her voice broke, showed the character in her voice.

Scotty McCreery: You’ve Got A Friend – It’s hard to rate this one, it is such a depressing song and Scotty sang it even slower than Carole King. The vocals were spot on, but not a good song choice in my opinion. Jackson said the beginning is flawless, excellent job. Tyler said it was a ‘just right’ song, he loved it. Lopez said it was great to see him aim higher and loved the story telling.

James Durbin: Will You Still Love Me Tomorrow – Best performance of the night, wow, this guy is going to take it! Tyler said he was sold on it – so beautiful and the first song he made out with girl with. Lopez said it was purely magical, the star of the night. Jackson is ‘in it to win it’, great singer, the most important thing – incredible this guy might just win the whole thing.

Casey Abrams: Hi-De-Ho – Ugh, I am so tired of him and that annoying voice. I don’t care if people think he is a musical genius, I don’t. Jackson said every time he brings a different thing, it took him back to New Orleans – he’s excited every time he sees him. Tyler said he worked the stage well, it was beautiful and made his scalp itch?? Lopez said the whole thing really worked but he would like if he could let loose a little bit physically.

Haley Reinhart: Beautiful – Not a good song choice, she’s going to be in danger this week. Tyler said she nailed it. Lopez said it was beautiful, one of the best voices in the competition. Jackson said he didn’t like the beginning, didn’t hear what else he had to say cause Lopez kept saying ‘what ever’ in his face.

Jacob should go home, but will he?  Personally, they could send him, Casey or Haley and it would be no loss. The best part of the night was a duet with Jacob and James singing Somethin’ Tells Me I’m Into Something Good, hilarious! Stay tuned tomorrow night to see who goes home and who will be in the top five.   My bet is that Haley will go home.