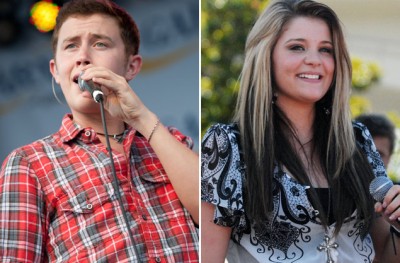 Last night, Rosie from Fit Fab Celeb blogged our recap and this is what she had to say after the show:

In last night’s episode of American Idol the clear favorite amongst judges Jennifer Lopez and Steven Tyler were Lauren Alaina – when they expressed their unfair influence to invoke favoritism so that she takes the Idol crown this evening. When it came to each of the finalists singing a song that would be released in the event that they win, Scotty McCreery was given I Love You This Big, which was very nice but nothing compared to what they gave Lauren.

Lauren’s song was Like My Mother Does, which was an ode to her mother and to add insult to injury, host Ryan Seacrest took her by the arm, led her down the stairs to hug her mother while she is still singing the song and zoom in on her and her mother’s tears. This an obvious and outrageously biased attack on Scotty. To make matters worse, Judge Lopez says “It is a really tight race, but with this song Lauren may just have won” and Tyler “First time I saw you, you were my American Idol, the rest of America will too”.

Both Lopez and Tyler have many fans. Idol is about showcasing your talent and having the judges critique it, not influencing voters to go one way or the other based on favoritism.

What do you think, did Lopez and Tyler give Lauren and unfair lead in tonight’s vote? Click here, to vote in Fit Fab Celeb’s poll and we will post the results after the show tonight.