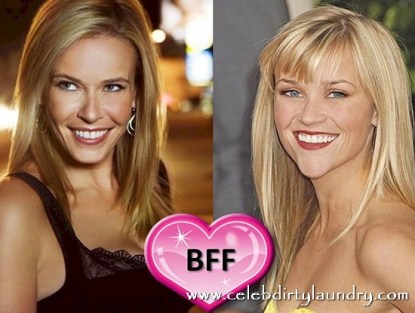 Looks like two of my favorite blondes are bonding –yayy!   I love Chelsea Handler and Reese Witherspoon, and although initially surprised at the friendship, couldn’t be happier that the two were caught hanging and having dinner out in Hollywood last night.  Apparently the two met and became fast friends while filming This Means War together last year (alongside Chris Pine – yum – and Tom Hardy).

Chelsea Handler is a class act, and has me in stitches every time I watch her show.  God knows Reese definitely has had her fair share of hilarious moments, so keep it alive ladies!!   Reese helped out her buddy by making an appearance on Chelsea’s new show After Lately earlier this month, and just tied the knot on Saturday to CAA agent Jim Toth.