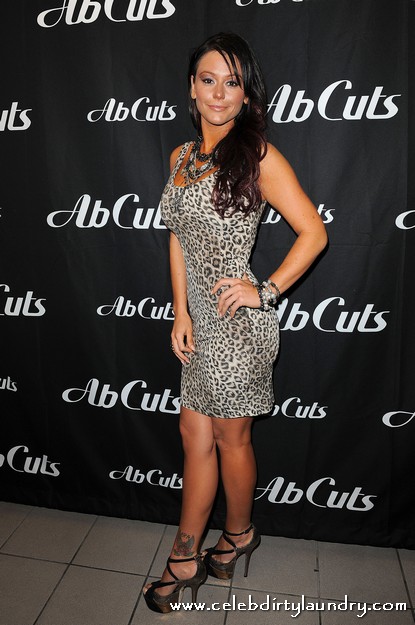 So it’s been 13 months since Jersey Shore’s Jenni Farley, better known as ‘JWoww’ to fans, and her boyfriend, Tom Lippolis broke up.  Since then the voluptuous reality star has moved on, and is currently getting ready to begin shooting yet another season of the hit show that fans just can’t seem to get enough of.  So why, of why is her ex now claiming that during their relationship he was stabbed by Jenni after a booze-fueled argument and received 37 stitches – yep – that’s right – 37 stitches?  All this because he allegedly posed in a picture with another woman?  Don’t flatter yourself Tom, you got nothing on JWoww’s new BF Roger Williams – who we like a lot!

According to Lippolis in a recent interview, he didn’t report it at the time because ‘he was in love with her’.  Sure, that’s what they all say.  Despite his accusations, JWoww’s rep had no comment, and is still fighting him in court over nude photos he has that he’s threatening to sell.  Doesn’t that just say it all??  Tom, you’re old news my dear – bring on Roger!!!