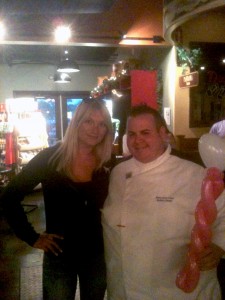 Hogan came to the restaurant looking for Chef Hesse and was excited for her chance to meet him. Hogan was also checking out the restaurant for her father, WWE Hall of Famer Hulk Hogan; as they wanted to try a sample of Hell’s Kitchen style cuisine.

Hogan was overjoyed to have her picture taken with Chef Hesse; which she requested.  Chef Hesse was honored to have a celebrity such as herself in his restaurant, and looks forward to provide them a Hell’s Kitchen experience at his restaurant that they are looking for.

“I love meeting other Celebrities from sports to music to movies, so meeting her was a pleasure for me and I hope to see her and her father around Pssghetti’s more in the future” says Hesse.