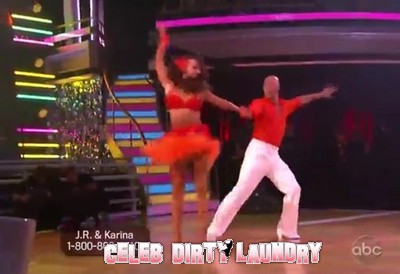 Last night on Dancing With The Stars the eight remaining contestants had to dance to hits from the 80?s.  The season is half way over and no one has jumped out as a leader.  Last night J.R. Martinez and Professional Dancer Karina Smirnoff danced the Samba to Gloria Estefan’s Conga.  If you missed the show last night read our official recap here!

JR is one of the best dancers on the show this season.  I think he will make it to the final four.  He really tried hard, he is likable and he always seems to have fun when he is performing.

About his performance, Len said:  Way to go Jose I will tell you what, I did not think you would perform like that.   In the future I will tell people to look at you to learn how to dance the Samba.  Bruno said:  You were like a sex machine.  You have so much fire down below it was like a volcano.  Brilliant.  Carrie said:   I want more of that, that was amazing, you are one fire, that is the way to dance the Samba.

Watch the video below and let us know what you think?  Do you think he will be eliminated tonight?  Sound out in the comments below!