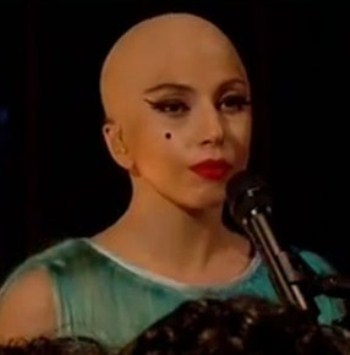 The ever-exciting Lady Gaga performed last night on Britain’s The Paul O’Grady Show – showing a whole new look. Gone were the horns jutting out from her head and shoulders – she instead decided to tone it down – and go bald.

I’ve often thought what I would look like with no hair, and although I dare not find out, I’ve got to say that LG looked pretty good. She initially began performing at the piano with a wig on (matching her green dress of course), and then took off the wig soon after, placing it on a stand beside her.

The singer then went on to ‘sing to her wig’. Yes, that’s what I said.   Weird? Yes, but it is Gaga so are we really that surprised? Let’s not forget flames also surrounded her piano. You know, just to make things different.

After her performance Gaga talked to O’Grady about the success of her latest album, ‘Born This Way’:  ‘I just can’t believe it, it’s such a dream come true and I was so nervous when I put the album out, I just wanted to make my fans so happy and wanted them to enjoy the music.’

When O’Grady noted that a lot had changed for the talented singer, she replied, ‘Yes, and I have less hair.’ So this is her new look? I guess we should expect baldness performances to come.