Matt Bellamy and Kate Hudson Back In L.A Shopping For Furniture… No Sign Of Baby Bing! 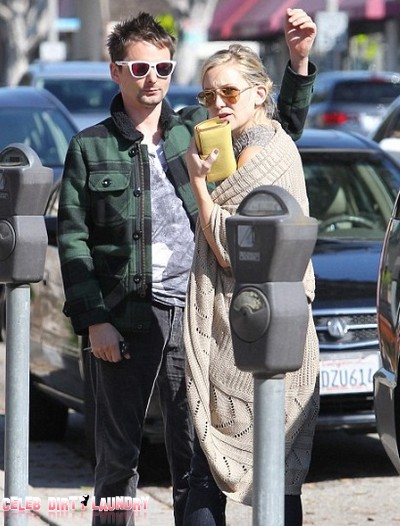 We haven’t seen or heard much from these two lovebirds as of late, especially since the two just welcomed new baby Bing (it’s official, his nickname is now NBB).

It appears that all is still well on the home front for actress Kate Hudson and Muse front man Matt Bellamy as the happy duo were spotted furniture shopping together in Brentwood, California on November 7th.

They looked to be having fun at Pom Pom Interiors furniture store, with Matt ‘testing’ out the comfy couches (I like his style).

Since the birth of NBB, the two have been residing in England where Matt lives, allowing him and his band to finish writing and recording for their new album.  I wonder if we’ll hear any lullaby tunes?

I’m happy to see that they are seemingly happy and making it work – the two also stepped out together Saturday night for the star-studded LACMA inaugural Art + Film Gala where Kate stunned in a cocktail dress, while Matt opted for the lumberjack look paired with jeans…keepin’ it cool like the fine rocker he is.