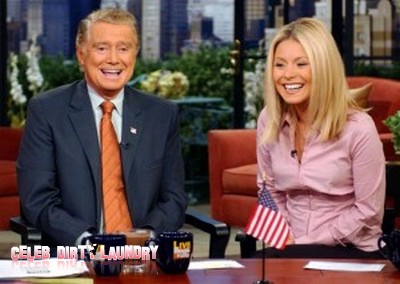 Is it just me or is anyone else sad that it is Regis Philbin’s last episode on Live! With Regis and Kelly this morning?  Regis, 80, is retiring after more than 28 years on television – 23 of them on Live!

First of all, I’m shocked that Regis is 80 – and secondly, 23 years on Live!?  He’s an enigma!  I’m not really sure what prompted Reg to step down, as certainly age doesn’t play a factor in his life, but apparently after contract negotiations fell through he decided to leave the show.

Regis was on CBS’s Late Show with David Letterman last night, and you can tell that the two are quite fond of each other.  Regis had Dave on his show at the beginning of the week and to the audience’s surprise Dave gave him quite the smooch on the lips.

Since September the show has been showing highlights from his memorable run – and without fail the man always has me in stitches.  Can we talk about how often he says ‘incidentally’?

Regis also, to my amazement, owns the Guinness World Record for most hours spent on TV (he was on Who Wants to be a Millionaire from 1999 to 2002.

Whatever Regis’ next adventure will be – and I don’t doubt there will be many more – I look forward to hearing about it seeing his wonderful personality and laughter shine on TV.  He’s truly a great entertainer, and a wonderful man.  Now I’m going to cry.  Love you Regis!