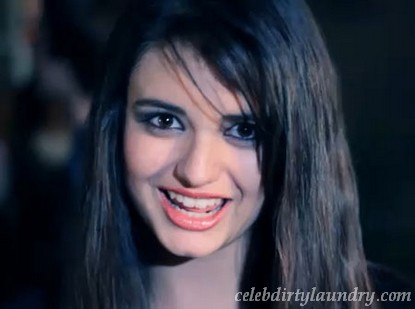 If you haven’t already heard/seen Rebecca Black’s video for “Friday”, we don’t suggest you waste 3 minute and 48 seconds of your life on watching it….but just in case you are interested, you can watch it HERE:  Black is a 13-year-old 8th grader who created her own music video for $2,000 dollars. After uploading the video to Youtube, it was only a matter of weeks before the video went viral, and now has over 30,000,0000 views!

Unfortunately for Black, people are watching this video and laughing at her, not with her. The comments posted by social media users range from “this is making my ears bleed” to the suggestion that Rebecca should “cut herself, get an eating disorder and die.”  Eighty eight percent of people “disliked” the video on Youtube.

However, the girl did something right, Black’s views have passed Lady Gaga’s viral video “Born this Way” and the girl has reached number 29 on the iTunes top 100 songs list. Simon Cowell even had a few encouraging words for the young aspiring star:

“I love [Rebecca] [and] the fact that she’s gotten so much publicity,” Simon told People on Friday. “People are so upset about the song, but I think it’s hysterical. I want to meet her. Anyone who can create this much controversy within a week, I want to meet. I love people like that.”

I really hope that Black’s 15 minutes of fame are up soon; I really want to be able to like Fridays again.