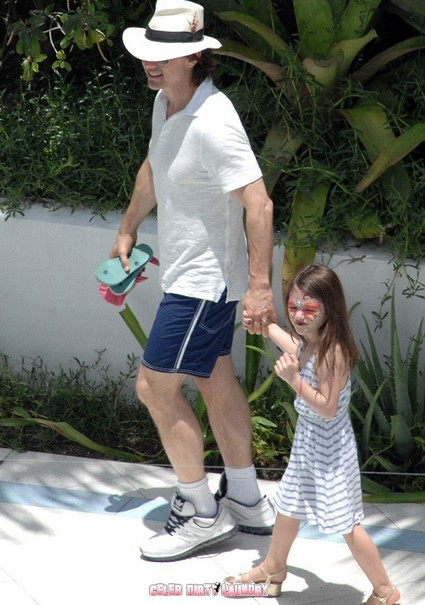 On July 3rd, while most Americans and celebrities were getting ready to celebrate the July 4th Independence Day, Tom Cruise and his wife Katie Holmes had something else to celebrate – Tom’s 49th birthday!

Katie surprised the actor with a birthday bash at Miami Beach’s SoHo Beach House.  The party took place inside the private venue where guests snacked on pasta, seafood, and chocolate birthday cake.

It’s hard to believe that Tom will be 50 next year – time flies!  He’s been making films for almost 3 decades, and has currently been filming Rock of Ages in Florida where he is portraying rocker, Stacee Jaxx. From the pictures I’ve seen of Tom while filming, to the most recent snaps from his party, if that’s what 49 looks like – bring it on!

His children from his previous marriage with Nicole Kidman, Isabella and Connor – were in attendance, as well as his youngest daughter, Suri, who sported a painted butterfly on her face.

Happy Birthday Tom, keep on working on the abs, as we don’t mind looking at them!