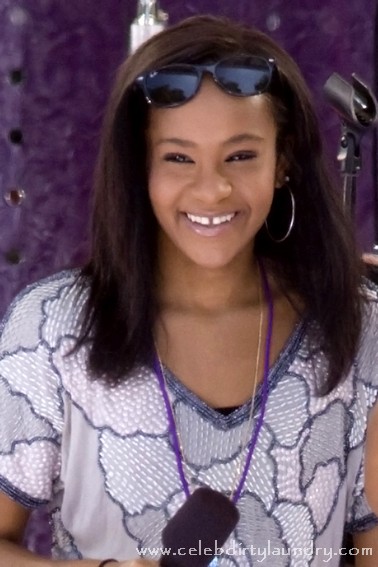 Last week we covered a story claiming Bobbi Kristina Brown only daughter of Whitney Houston and Bobby Brown snorted cocaine at a party at the age of 17.  Pictures of the alleged snorting were released and Bobbi Kristina denied authenticity of the photos.  Today MediaTakeOut.com is claiming that they have been approached with a sex tape of Bobbi Kristina and her ex-boyfriend for sale.

The tape was described to us as “freaky” and “explicit.”   Unfortunately the sellers didn’t realize that it is ILLEGAL to sell, or post explicit material of a child under 18. They MISTAKENLY believed that since Bobbi Kris turned 18 over the weekend the tape would be for sale.

The tape was shot when she was underage and I am guessing the person who is selling it thinks because she is now 18 years old it is legal to sell.  Wrong!  Anyone selling or buying that video may land up in jail.    I bet it is the ex-boyfriend that is selling the video.  This is not the first scandal for Bobbi Kirstina it has been rumored for years that she is wild and out of control.    Pictures of her allegedly snorting cocaine were recently released, pictures of her drinking and myspace pics of her smoking weed were leaked in December.  It is no wonder that this girl is out of control with how messed up her parents have been.    Where were they when she was doing all this?  What do you think of the situation?