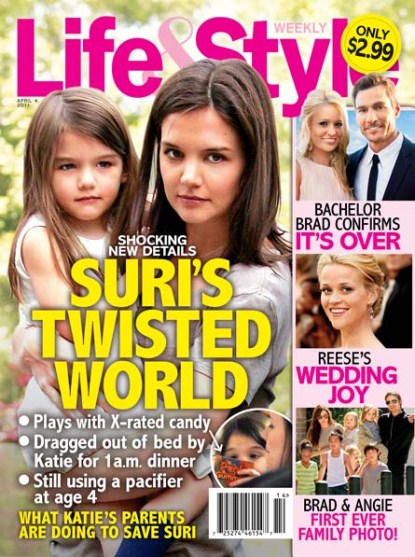 Tom Cuise and Katie Holmes’ 4 year old daughter, Suri is often seen out at late night broadway shows, late dinners, playing with penis-shaped candies, wearing heels and red lipstick and walking around with a pacifier.   Suri is not treated like a regular 4 year old and is not having a normal childhood.  Tom and Katie are raising Suri using the Scientology method where children are treated like adults and allowed to make their own decision.

The method is already having an effect on Suri and she is having more and more temper tantrums until she gets her way.  “During a late-night trip to Serendipity in NYC on March 15, Katie and a nanny couldn’t get Suri into her car seat. ”  As always, Suri won and didn’t have to sit in her car seat,” says the witness.

Suri is only four and the problems are already starting, imagine has Suri becomes a teenager and she continues to get her way – I see problems ahead for Suri.

Meanwhile mother Katie Holmes was asked when approached at the John Frieda Precision Foam Colour event last night in NYC, if she was tired of her parenting being critiqued Katie responded “no”  She added, “Suri is doing great, thank you.”