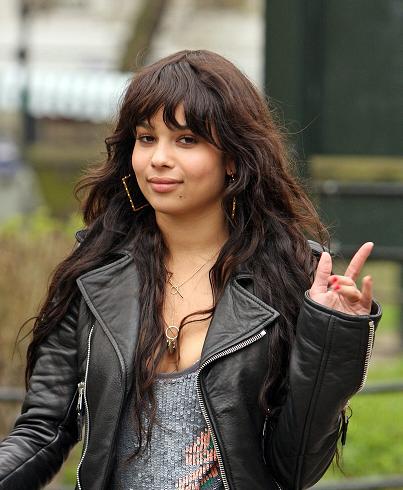 Do you remember Denise Huxtable on The Cosby Show?  Well, not only is Lisa Bonet all grown up – so is her daughter with rocker Lenny Kravitz.  Twenty-two year old Zoe Kravitz is quite the stunner, and after the new upcoming X-Men: First Class film getting ready to hit theatres, I’m guessing she’ll being popping up a lot more.

The young actress recently sat down with Wonderland magazine for the April/May issue and discussed getting the role on X-Men, and what it’s like having famous parents.

“When it comes to stuff like X-Men, I just didn’t think that I would get that part. I just think I auditioned because people were auditioning and my agent was like, ‘Please go’, and had to talk me into going”

“Having well-known parents is kind of a double-edged sword. It’s given me wonderful opportunities, but people also like to knock you down because of it too and say that you have got things because of that”

“They told me not to take it seriously. People get very serious about the Hollywood fame thing and the reason I think I came out level-headed was that they didn’t raise me to think it was anything serious. I had no illusions. People get way too deep about it and in the end it’s just a job and we’re all equal.”0

Sounds like good advice to me Mom and Dad!