A Breach of Security at the Beckham House 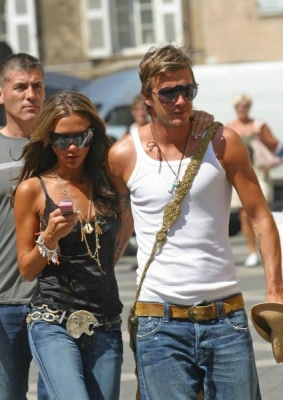 The bodyguard of soccer superstar David Beckham and his wife Victoria reportedly pulled a gun on three intruders who managed to hijack security at the couple’s Spanish home. The intruders were allegedly confronted by the Beckhams’ armed minder after he spotted them slipping through a metal gate and heading towards the couple’s $ 9.5 million house in Madrid on CCTV at 11am on Tuesday.
A source told British newspaper the News Of The World, the security guard pointed his pistol at the intruders, shouting, “Stop! Stop! Don’t move! I have a gun.” The petrified trio immediately put their hands in the hair and admitted they were Japanese journalists filming a documentary on the lavish homes of celebrities, but the guard reportedly kept his gun pointed at them, screaming, “Give me the camera! Give me the camera!” The guard only lowered the pistol when one of the intruders reluctantly handed over his digital camera, before six armed policemen arrived at the house to take the intruders away.
The former England soccer ace was training with his Real Madrid teammates at the time of the break-in, but his wife Victoria and their one-year-old son Cruz were inside. A representative for the Beckhams admitted there had been a breach of security at the house, saying, “Japanese fans are great, but they are the most intensive fans on the planet.” However, she refused to confirm a gun had been drawn on the intruders, claiming, “I don’t know the details.
source