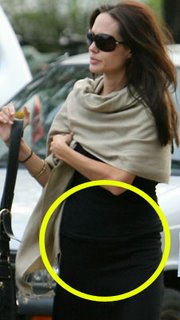 It was a hot day in Pune, India, when Angelina Jolie, 31, arrived at the local airport on Oct. 28 to meet Brad Pitt, 42. The two, minus their three children — were headed for a romantic three-day getaway to the super-private Taj Lake Palace hotel; the famous hotel in the lake, where parts of 1983’s Octopussy was filmed.
Yet Angie, who has run herself ragged over the last year raising three kids under age 5, suspiciously clutched a shawl around her loose-fitting dress, concealing what an on-looker tells Star looked like a baby bump!”When she got out of the car, she walked straight to the building, and she was messing around with the scarf, trying to cover herself with it,” the witness says.
In fact, the actress, who wore similar baggy dresses and cover-ups early in her pregnancy with 5-month-old daughter Shiloh last winter, has been struggling over the last few weeks of shooting A Mighty Heart in Pune. “I heard she’s not able to hold down food very well,” a source tells Star. That’s not all: The source adds that Angelina is back on prenatal vitamins and she’s off birth control!
Source