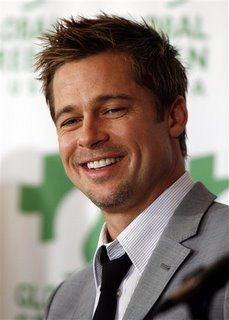 Hollywood star Brad Pitt has joined former U.S. President Jimmy Carter to help volunteers from a Christian charity build homes for the poor in western India, the organisation said.
Pitt, who is in India with partner Angelina Jolie for a film shoot, dropped by the tourist town of Lonavla on Monday to briefly lend a hand to thousands of volunteers from Habitat for Humanity.
Each year since 1984 Carter and his wife Rosalynn have spent a week building homes for the organisation around the world and promoting its work. This week they were also joined by former Australian cricket captain Steve Waugh among others.
Photographs showed Pitt, wearing a white shirt, dark jeans, goggles and a baseball cap, fixing a window grill with gloved hands. Another showed him intently slapping cement on bricks.
This week, the organisation is building 100 simple, affordable homes for the poor in Lonavla, about 85 km (50 miles) southeast of Mumbai, India’s financial and entertainment hub. Pitt spent about half an hour working under the hot sun and talking to volunteers, newspaper reports said.
Source