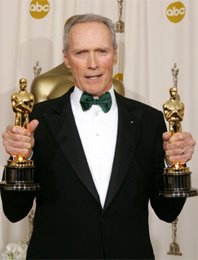 Clint Eastwood is baffled why heiresses like Paris Hilton are deemed stars.
The four-time Oscar winner said when he was young only a few actors were given the celebrity tag. “Movie actors who were celebrities were a handful — a handful of men and a handful of women were names,” Eastwood, 76, told reporters in Los Angeles. “Now, everybody is a star so you have to have superstars.
“People are stars who are just heiresses or something now.” Eastwood examines hero worship and celebrity in his new film, Flags of Our Fathers, an epic set around one of America’s bloodiest battles of World War 2, the invasion of the Japanese island of Iwo Jima.
The movie, tipped to be a force at February’s Oscar ceremony, follows the true life story of three US Iwo Jima veterans transformed into celebrities by the American government to raise money for the war effort. “The era we live in now everyone is considered a hero,” Eastwood said.
“In that particular era, the 40s, heroes were people of extraordinary feats.” Eastwood said when he was growing up champion boxer Joe Louis, US President Dwight Eisenhower, General George Patton and actor Gary Cooper were his heroes.
“We’re in a much different era,” Eastwood said.
source