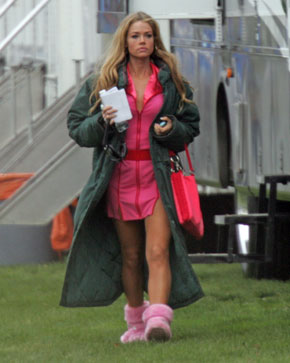 Denise Richards had a meltdown on the set of Blonde and Blonder in Vancouver, Canada, on Wednesday when she saw photographers snapping her picture from a third story balcony of the River Rock Casino Resort. “She went ballistic and approached the photographers screaming,” says an eyewitness. After trading insults, Denise launched into a tirade and threw two lap top computers off the third story balcony, hitting two women, ages 81 and 90, sitting on the couch in the lobby.
Denise, who is staying at the same hotel where the incident took place, invited the 81-year-old woman to her room to apologize. The woman agreed to meet with Richards and is not pressing charges. Afterward, Richards returned to work and continued filming scenes.
The entire episode was caught on hotel security camera, which is being reviewed by police. The photographers are meeting with their lawyers today to discuss the matter and to decide whether or not to press charges. “Based on the behavior of the paparazzi, they are lucky their laptops were the only thing tossed over the balcony,”
Richards’ rep tells Us. Royal Canadian Mountain Police Corporal Peter Phiessen tells Us: “We attended an incident at our local casino. There was an altercation between the star actress filming and the paparazzi which resulted in the actress throwing two lap tops off an interior balcony into the lobby below.
Two elderly women aged 81 and 90 were stuck by the laptops. They suffered slight injuries to their arms and were checked out by medical personnel on the scene. They had no serious injuries. We are continuing to investigate to determine whether criminal charges are warranted.”
source