EVERY OTHER CELEBRITY CAN ADOPT WITHOUT PROBLEM EXCEPT MADONNA! 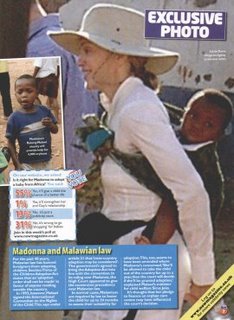 A Malawian man who gave up his 13-month-old son to be adopted by Madonna said Sunday he had not realized he was signing away custody “for good.”

Yohane Banda signed adoption papers earlier this month, clearing the way for a Malawian judge to grant the pop singer and her husband a temporary order to take his son David.”Our understanding was that they would educate and take care of our son just as they were doing at the orphanage,” the 32-year-old illiterate peasant farmer told The Associated Press in a telephone interview from Lipunga, the village where he ekes out a living growing onions and tomatoes.

Until now, Banda has said his decision was in the best interests of his motherless son and criticized local charities who have started legal proceedings to challenge the adoption.Banda said his understanding was that “when David grows up he will return back home to his village.” He said the director of Child Welfare Services, Penston Kilembe, and the retired pastor who heads the orphanage where David spent most of his life never told him by “adoption” it meant David will cease to be his son.
“If we were told that she wants to take the baby as her own we could not have consented, because I see no reason why I should give away my son,” he said.
Banda’s wife died shortly after childbirth — a relatively frequent occurrence in the impoverished African nation which suffers from high rates of maternal and infant mortality — and he left his son with the orphanage. He lost two children in infancy to malaria.
Banda said he was illiterate and so had no idea of the significance of the adoption papers he signed in the High Court in the capital, Lilongwe.
“Mr. Kilembe and the pastor explained to me that Madonna would take care of my son; I am just realizing now the meaning of adoption,” he said, claiming that he has no copies of documents pertaining to the adoption. “All the documents are with Mr. Kilembe,” he said.

Madonna’s Malawian lawyer Alan Chinula also refused to comment, saying his clients have not given him any fresh instructions, but he insisted the singer followed all the procedures to adopt the child.

Our understanding as family is that David is still part and parcel of our clan,” Zimba said. “After the good woman nurtures and educates him, he will return back.” Mwale said: “I look forward to telling my grandson how destitute he was after losing his mum at the tender age of three weeks, how we surrendered him to the orphanage and how this good woman took him away.”
However, the family insisted that it did not want David to return to the orphanage. “We are still thankful Madonna has rescued him from poverty and disease; we pray for the good Lord to keep blessing her for her benevolence,” Banda said.
SOURCE