FEDERJERK IS THE DOPE Y’ALL!

FEDERJERK CONTINUES HIS GHETTO PROMOTION! YO, HE SO DOPE YOU ALL! I MEAN GO BUY HIS ALBUM! YUCK! 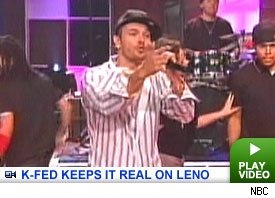 And, if Federjerk could not get any more pathetic think twice:

Pop star BRITNEY SPEARS is trying to boost the sales of her husband KEVIN FEDERLINE’s debut album by sponsoring a contest where the fan who helps sell the most albums gets to party with the couple on Halloween (31OCT06). According to MSNBC’s The Scoop, the couple are having a special CD release party on Halloween night to promote the aspiring rapper’s debut album PLAYING WITH FIRE. The second prize is a pair of sneakers that Federline wore when he performed at the Teen Choice Awards in August (06). The third place winner gets a $200 (GBP111) gift certificate, while 10 runners-up get a replica of a medallion that Federline wears.