HEATHER MILLS KNOWS WHEN TO STRIKE BACK WHEN SHE LEAKED TO MUCH INFO! 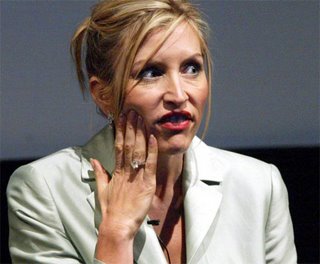 Heather Mills McCartney’s lawyers said Tuesday she is suing two newspapers over “false, damaging and immensely upsetting” stories surrounding her divorce from Paul McCartney. Yeah right, Mills they made it all up. Just like Stella made up that you were are gold digger!
The law firm Mishcon de Reya named the Daily Mail and London’s Evening Standard as the subject of legal proceedings, adding that a suit will also be filed against The Sun. Mills McCartney had been vilified in the media and was now being stalked by photographers, the firm said. It alleged that other newspapers had also printed false statements but the three listed would be the focus of the lawsuit.
“She cannot sue — for now, at least — every single newspaper that has published false, damaging, and immensely upsetting statements about her. She should not thereby be taken to have accepted that these statements are true,” the statement read.
Associated Newspapers, the publisher of the Daily Mail and the Evening Standard, said the stories about Mills McCartney in both papers “were obtained by proper methods and in accordance with good journalistic practice.” “Our exclusive stories were extensively followed up in detail by all other newspapers and media outlets,” it said in a statement. The publisher said it would deal with the legal claim “in the normal way.”
“She is pursued everywhere she goes. She is stalked by press photographers, who congregate outside her home and chase after her in cars — regardless of her safety or the safety of her daughter,” her lawyers said. Mishcon de Reya issued a copy of a letter, apparently from The Mail on Sunday’s investigations editor Dennis Rice, offering Heather’s sister Fiona a “substantial sum” for information about the divorce.
It said the letter was hand-delivered and promised anonymity. “It requires no imagination to conclude what kind of information was being sought from our client’s closest confidante, nor why the assurance of confidentiality was believed to be necessary,” the statement said. “We ask on behalf of our client for the media, as a matter of common decency, please now to show some restraint.”
source