I LOVE MADONNA, BUT I MUST AGREE THE TRACKSUITS SUCK! 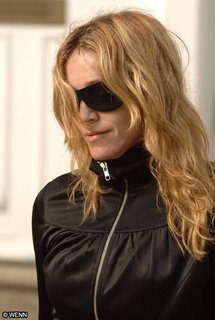 Three months after Madonna launched her tracksuit in three colours to much fanfare, the merchandise still remains in the store suffering from lacklustre sales.
British designer STELLA McCARTNEY created a near riot at H+M stores last year (05), when she designed a special collection, which immediately sold out.
The US spokesperson for the company tells Radar Online that sales comparison’s to McCartney’s collection aren’t fair because the designer created the 30 to 50 piece line herself, while Madonna’s contribution “is just a tracksuit that we had designed.”
Media reports at the time claimed the HUNG UP star had designed the trendy tracksuit as a thank you to the company for providing her dancers, band and crew members with a full off-stage wardrobe during her global CONFESSIONS tour.
The H+M spokesperson claims the sales of the tracksuit are doing “very well” but refused to reveal any sales numbers, saying the success of the piece was based on company expectations, not exact sales figures.
(picture of Madona leaving the Gym in London 10/18/06)
SOURCE