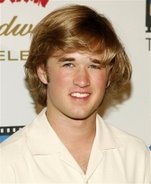 Haley Joel Osment pleaded no contest Thursday to misdemeanor drunken driving and drug possession charges resulting from a July accident in which he crashed his car into a mailbox.

Superior Court Judge John Doyle sentenced the 18-year-old actor to three years probation and ordered Osment to spend 60 hours in an alcohol rehabilitation and education program, as well as attend at least 26 Alcoholics Anonymous meetings over a six-month period.

Osment, who didn’t attend the court hearing, also must pay $1,500 in fines.
The actor’s attorney, David Wood, entered the no contest pleas on his client’s behalf to one count each of misdemeanor driving under the influence and misdemeanor marijuana possession. Two other charges — another misdemeanor DUI and a vehicle code infraction — were dropped by prosecutors.