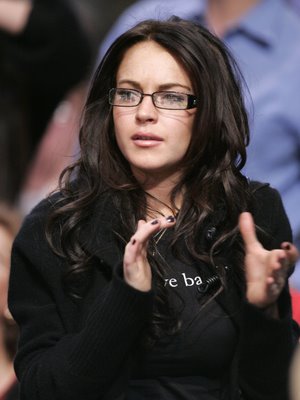 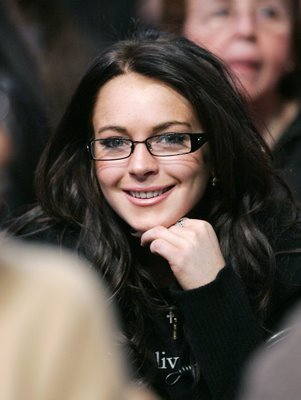 Lindsay Lohan at the Los Angeles Lakers Game (11/30/06)
DESPITE attending “several” Alcoholics Anonymous meetings this week, Lindsay Lohan drank champagne and made a big scene at the GQ Men of the Year dinner – all under the watchful eye of her hard-partying mom-ager, Dina Lohan.
When the Lohans arrived at the exclusive dinner at the Sunset Tower she “flipped out” upon seeing Jessica Biel, the luminous star of “The Illusionist,” there with her assistant. Biel’s assistant used to work for Lohan and earned the “Mean Girls” star’s ire when she quit several months ago. According to a witness, Lohan started screaming, “If she stays, I’m outta here! I can’t look at that girl! I can’t believe you would allow an assistant in here – she doesn’t belong in here!”
“It was really uncalled for,” said our spy. “Jessica and everyone else ignored her.” A rep for Lohan said, “This does not sound like Lindsay.” A Biel friend said, “Jess didn’t steal anyone’s assistant – her assistant stopped working for Lindsay a long time ago. And whatever drama happened, Jess was no part of it. She is not part of [Lohan’s] crowd – she is a professional.” A rep for Biel declined comment.
Lohan was shunned at the glittering affair by other celebs who are tired of her bratty antics and bad work ethic. Overhearing her tirade about Biel’s assistant, Will Ferrell turned to DiCaprio, Gore and Affleck and said, “Who cares about that freak anymore, anyway?” – setting off laughter.
Later, Lohan, with a champagne glass in her hand, tried flirting with Leo, to no avail. When “Jackass” star Johnny Knoxville arrived later in the evening, Lohan lit up and the two began nuzzling and necking – until Lohan’s ex, Harry Morton, appeared. “Harry had been called by Lindsay, and he arrived with a bunch of her friends, and then they all left together, including Johnny. It was weird,” said a source. “Dina did a lousy job of reining in her daughter, and it looked like she just used Lindsay to get into the party in the first place.”
source