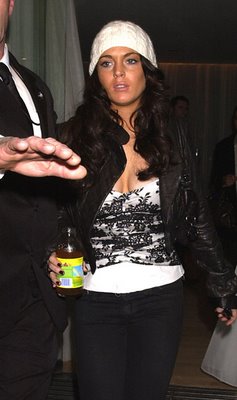 Like father, like son. Dad George was a legendary womaniser and it seems charming the ladies is also what Calum does Best, too. He and Lindsay Lohan had been inseparable since meeting in a club last week. But six hours after leaving her hotel suite, the 25-year-old Love Island Lothario was “fooling around” with a married woman. The Mirrow revealed earlier this week that Lindsay, called security to try and stop Calum leaving her room, worried that he was meeting another girl behind her back.
Calum said he was worn out after five nights of partying and was due in Belfast to turn on the Christmas lights. But when he turned up at London Heathrow for his flight to Ireland, and saw a pretty girl in the BMI business class lounge, his “exhaustion” – and Li-Lo – were soon forgotten.
The conquest in question told a pal: “Calum shouted over to get my attention. He bought me a drink and we started snogging. It’s not something I’d normally do, but he was very charming.”
Realising they were on the same flight, Calum made sure they got seats next to each other. Our source adds: “They snogged all the way. He was pulling her hair, biting her playfully and they were generally fooling around. He asked if she wanted to join the Mile High Club, but she politely declined.”
But his new pal wasn’t so coy about going back to his hotel later, telling her friend the next day: “I spent the night with him. I’ve got his number but can’t imagine I’ll be seeing him again. I know what he’s like.” So does Lindsay now. A friend of the star, who is back in LA, says: “She will be furious when she finds out what he’s been up to – especially just hours after he left her.”
Calum’s spokesman said: “Calum did meet a woman at Heathrow and they were very friendly on the plane. They didn’t spend the whole night together, though.”
source