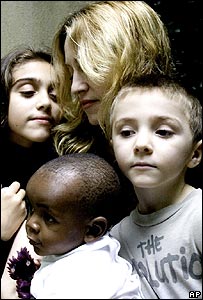 Madonna said Tuesday that the father of the African boy she is trying to adopt refused her offer of financial assistance to help him keep his son. Some critics have said it would have been better for 13-month-old David Banda if Madonna had helped his impoverished father to care for him at home in Malawi rather than bringing the boy to live with her and her family in London.
“I said I would be happy to … bring him back to your village and help you financially raise him. And he said no,” Madonna told Meredith Vieira in an interview set to air Wednesday on “Dateline NBC” and Wednesday and Thursday on “Today.”
“I think he truly felt in his heart of hearts — and who knows if he was telling me the truth — that he would have a better life with me. So when he said no, that was, you know, that was my sign that…it was my responsibility to look after him.”
The boy’s father, Yohane Banda, said last week that he feared criticism of the adoption would prompt the singer to drop her efforts, and he urged her not to do so.
Madonna told “Today” reflects “our inability to focus on the real problems and our desire to have distractions and to be consumed with people’s personal lives and gossip.”
She also said that the public’s issue with the adoption was motivated by racism. “That’s underneath a lot of people’s prejudice about me adopting David,” she told “Today.” “I think a lot of people have a problem with the fact that I’ve adopted an African child, a child who has a different color skin than I do.” Madonna said she adopted the boy because she “wants to be part of the solution.”
source