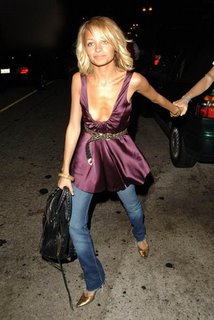 On October 26, Nicole Richie’s rep announced that the size-0 actress, whose weight slipped to an estimated 87 pounds this summer, was undergoing treatment for her weight issues. “I’m not in rehab, and I don’t have an eating disorder,” Richie tells Us.

“I’m getting the help I need and taking care of my health.” Both Nicole’s dad, Lionel Richie, and mom, Brenda Harvey Richie, have been concerned for some time, say family insiders, and the 25-year-old starlet was deeply affected by her relatives’ shock when she arrived in Alabama to attend her grandmother’s October 21 funeral. “They told her she was too skinny and it really hit home,” says a friend who attended the memorial. “It was a turning point.”
Though Richie won’t confirm the nature of her treatment, Us has learned that she is being seen at a Newport Beach, California, facility, where she is undergoing doctor consultations and blood tests.
source