No Prenup for Reese and Ryan! 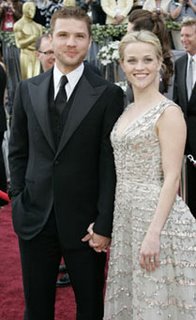 Reese Witherspoon’s fortune is fair game as her marriage to Ryan Phillippe comes to an end specifically, there is no prenup.The financial consequences are enormous. Witherspoon now commands $20 million a movie. In 2005, Witherspoon raked in a total of $30 million for two movies, “Just Like Heaven” and “Walk the Line.”Phillippe has been commanding around $2.5 million a film, making him bankable, but clearly not in his estranged wife’s league.Under California law, without a prenup, earnings during a marriage are divided up 50/50.

Connected sources a told on a scale of one to ten, one being a peaceful breakup and ten being Hasselhoff, the Witherspoon/Phillippe split is a three. And, we’re told, it will almost certainly stay peaceful, partly because of the children and partly because of the couple’s personalities. TMZ was told there is no talk of reconciliation and that divorce papers are merely a matter of time