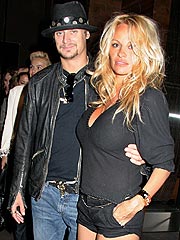 Pamela Anderson has filed for divorce from Kid Rock, her rep has confirmed. “Pamela filed for divorce last week,” Anderson’s rep, Tracy Nguyen tells. “It wasn’t a happy Thanksgiving.” A rep for Rock had no comment.
On Monday, Anderson posted the following message on her Web site:
1/27/2006
Divorce
Yes, it’s true.Unfortunately impossible.
In fact, Anderson and Rock, both filed divorce petitions Monday, each citing irreconcilable differences, but they gave different dates of separation. Anderson’s papers said they separated before Thanksgiving weekend, on Tuesday, Nov. 21, 2006, while Rock ? who filed under his real name, Robert Ritchie ? said they separated on Sunday, Nov. 26. No reasons were given for the discrepancy. Both ask that the court not get involved in awarding spousal support.
source