PARIS HILTON DOING WHAT SHE DOES BEST! SHE BETTER SAVIOR IT!

Apparently, Hilton left fuming after being told not to show up at the week-long ‘Esquire Show House’ event in Los Angeles. The host, whose guests included actors Orlando Bloom and Winona Ryder, had reportedly instructed his security team not to let Paris in because “the likes of Paris Hilton and her are not welcome here”. “She’s been told not to come to the opening next Thursday. Organizers don’t want her ‘type’ there,” the Sun quoted an insider as telling the New York Daily News. 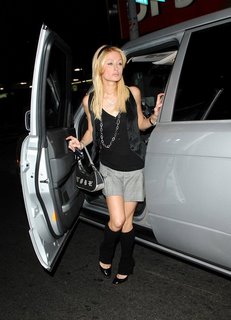 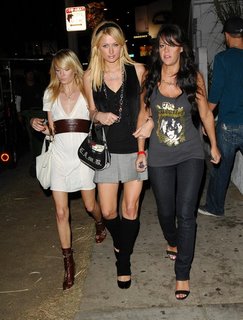 Paris Hilton At Hyde Night Club. I actually like what she is wearing, but the leg warmers have to go? Isnt that like so two years ago! Now that’s not hot! Paris really likes to be the prettiest out of the bunch, huh? Who’s that scary girl with Paris on her right?

One response to “PARIS HILTON DOING WHAT SHE DOES BEST! SHE BETTER SAVIOR IT!”