POOR MCARTNEY! WE ALL SAW THIS COMING? 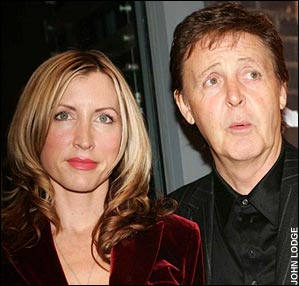 News leaked on Wednesday that Mills Mcartney filled and alleged court document containing accounts of mistreatment and drug use during the couples four year marriage. Mcartney’s lawyers issued a statemnt citing he would resist the temptation to counter allegations of domestic violence and drunkenness:
“Since the breakdown of his marriage Sir Paul McCartney has maintained his silence in not commenting on the media stories, believing that it was best for all concerned, particularly his children, for there to be some dignity in what is a private matter. Our client would very much like to respond in public and in detail to the allegations made against him by his wife and published in the press but he recognises, on advice, that the only correct forum for his response is in the current divorce proceedings.

“Our Client will be defending these allegations vigoursly and appropriately.”

Hmmm… seems to me that their is going to be much more news coming out about these allegations from her camp… I have to give it to him for being more professional than his “estranged” wife… we all know who leaked those document… cough cough!