THE WORLD IS REALLY COMING TO AN END! 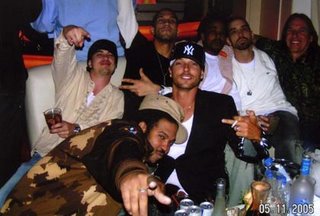 Federjerk will make his Hollywood debut in an upcoming hip-hop movie directed by rapper STICKY FINGAZ. He will star in musical CAUGHT ON TAPE. Fingaz, who stars in the TV series spin-off of the BLADE franchise, says, “This is a hardcore musical – lots of violence, sex, action, drama, plus sentiment and romance as well. “It’s Kev Fed’s (movie) acting debut. He’s really cool.”
I really can’t understand this! AM I THE ONLY ONE THAT HATES the VILLAGE IDIOT? Was he put on earth to drive me insane?
Source