THIS IS BULLS*IT – MADONNA FORCED TO REMOVE CROSS 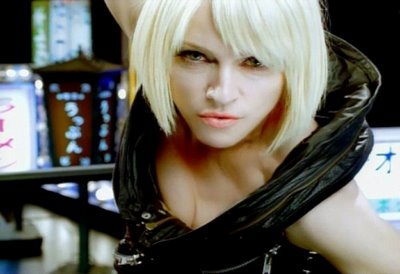 NBC announced today that it had ‘revised’ Madonna’s Confessions Tour for broadcast on Wednesday 22 November. A source said that Madonna’s performance of Live To Tell would be included but in a ‘revised’ version which will not actually show Madonna on the cross. NBC themselves did not actually say what they have revised.
After weeks of controversy, NBC has decided not to show pop star Madonna suspended from a giant cross and wearing a crown of thorns when the network airs a special of her ‘Confessions’ tour, a source close to the organization of the event said on Thursday. The source spoke after NBC announced it had revised the two-hour concert special, which airs November 22, but did not elaborate on what changes would be made. The source said the portion of the ‘Live to Tell’ song in which Madonna sings suspended from a giant cross and wearing a crown of thorns will not be shown in the broadcast.
Instead, cameras will cut to other shots or images while Madonna is on the cross. She steps away from the cross to finish the song. The special was filmed during her performance at Wembley Stadium in London during her ‘Confessions’ tour. Madonna, who is an executive producer of the special, initially insisted that her appearance on the cross, which had been a controversial centerpiece of her stage performance, be included in the NBC special. But after complaints from Christian groups, a number of NBC affiliate stations expressed uneasiness to the network about carrying the broadcast if it included Madonna singing from the cross.
WELL JUST TO LET EVERYONE KNOW I AM A HUGE CRAZED MADONNA FAN. THIS IS JUST DUMB. IM SORRY, BUT IF THESE CHRISTIAN GROUPS WERE AT THE CONCERT THEY WOULD HAVE ACTUALLY REALIZED MADONNA WAS SAYING WE SHOULD TRY TO ACT MORE LIKE JESUS. SHE SHOWED SHOTS OF HUNGRY CHILDREN! SHE WAS TRYING TO SAY SOMETHING.
Source