WHEN ALIENS ATTACK PART 16: Even Aliens Need A Vacation

BY Robyn Good on November 21, 2006 | Comments: Leave Comments
Related : Uncategorized
After their weekend wedding in Italy, Katie Holmes and Tom Cruise have touched down in the Maldives, 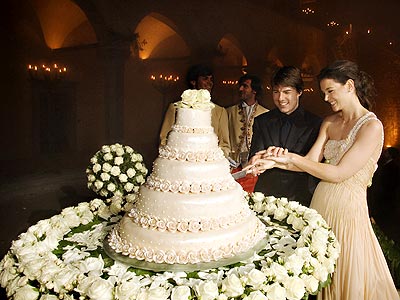 a government official confirmed Tuesday. “Yes, they are here, I can confirm that,” chief government spokesman Mohamed Hussain Shareef told the Associated Press. “They have gone to one of the islands, but this is very, very secret.”
A witness who saw Holmes and Cruise arrive at the airport told People magazine they were “smiling so much.” The duo, with Suri in tow, was reportedly traveling with about 40 pieces of luggage, plenty of toys and the lack of a much reported third wheel. While Scientology leader and de facto best man David Miscavige was reportedly spotted boarding the Cruises’ private plane to the Maldives in the early hours of Sunday morning, he has yet to be seen accompanying the newly hitched lovebirds on their trip.
A source familiar with the couple’s itinerary told Reuters that the newlyweds are spending their vacation aboard the luxury yacht the Arctic P, which is currently anchored off the coast of the island of Male. The yacht, a converted icebreaker, belongs to Cruise’s pal, Australian media mogul James Packer, who attended the wedding and also reportedly owns the jet that transported the couple to the Maldives.
Another government official, who spoke on condition of anonymity, said the couple would remain based on the boat but planned to visit several of the islands. “At the moment, we hear that they are cruising on the yacht and that they are expected to visit some of the island resorts—at least one exclusive and expensive one with its underwater restaurant,” the official said.
Nov. 28, they’ll reportedly set sail back to the U.S. Once home, the couple is rumored to be holding a second Catholic ceremony in honor of Holmes’ upbringing.
source