Who’s on Crack at The WWE? 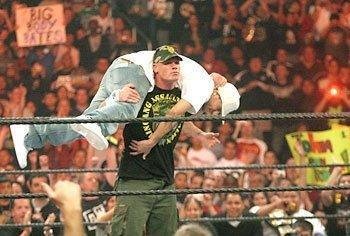 Last Monday night, Kevin Federline a.k.a. K-Fed appeared on Monday Night RAW with his good friends Johnny Nitro and Melina. During his appearance, Federline was involved in a physical confrontation with WWE Champion John Cena which saw the aspiring artist become the recipient of an F-U.K-Fed was furious with Cena’s actions and the treatment he received during his visit.
As a result, he has informed RAW’s Executive Assistant Jonathan Coachman that along with Melina, he will be in Johnny Nitro’s corner for his match this Monday on RAW with Cena.
Jonathan Coachman has also released the following statement to WWE.com.“I am pleased to announce on behalf of Mr. McMahon that WWE will have the distinct privilege of promoting Kevin Federline’s new album “Playing with Fire.” I have listened to the album, and I can assure you that is nothing short of a musical masterpiece.”
Okay, I really have to see this cause I was actually watching the WWE with my boyfriend last week and it was so embarassing for Federjerk! I ALMOST felt bad for him. The spectators hated him and told him to F**K OFF! LOL! Seriouly, though Federjerk is the luckiest guy in the world, I wonder how much Brit Brit is paying for them to promote his album! LOL! I guess I’m not going to get my wish FEDERJERK is HERE TO STAY! Shoot me now!